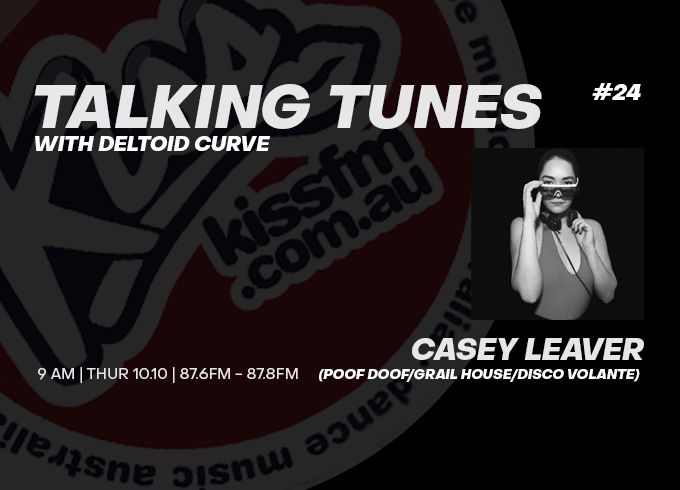 In this edition of Talking Tunes, we have Melbourne based DJ, Casey Leaver who has made a name for herself with her energetic and uplifting “hands in the air” performance style. She cut her teeth playing house music but quickly diversified into techno, minimal as well as the more melodic and progressive styles of dance music.

Being drawn to anything with a groove or some soul behind it has helped her to become an incredibly versatile artist. Loving all things funky, jazzy, she’s been known to dabble in disco and even downtempo. Casey works her upbeat style into her sets to create an emotive flavour of sound, providing the crowd with an abundant source of party vibes. Her sound draws from a wide range of influences including early 2000’s electro-house throwbacks right through to the classic hip-hop and disco from the ’70s and ’80s. This mix of knowledge gives her the power to have the dance floor in front of her always moving and grooving.

Casey has ingrained herself the Melbourne music scene over the past 5 years not only as a talented artist but as one of Melbourne’s premier event managers and promoters. Building brands with iconic local venues and touring high-profile artists across the country. After working with major outdoor events and international club brands such as Babylon Music Festival and Glitterbox she has now co-launched Grail House Management, a successful nationwide DJ management agency.

All of this has led her to support some of the best names in house music, techno and from across the globe including the likes of Todd Terry, Stephan Bodzin, Sandy Rivera (Kings of Tomorrow), Seth Troxler, Doorly, Gene Farris, Ron Carroll, Nastia, Solee, Nora En Pure, Gorge, Mat.Joe, Sam Divine, Late Night Tuff Guy, Dr Packer, Harvey Sutherland,  Juliet Fox + Max Chapman. She’s also proud to have shared lineups with indie/alternative rock/electronic acts and bands such as PNAU, The Temper Trap, The Kooks and Xavier Rudd, all of which had a large influence on her listening while growing up.

We’re excited for her to come into the studio and talk tunes with host Deltoid Curve (aka The Cush), a long-time collaborator and close friend. Don’t miss out on this peep into the world of one of Melbourne’s hardest working DJs.