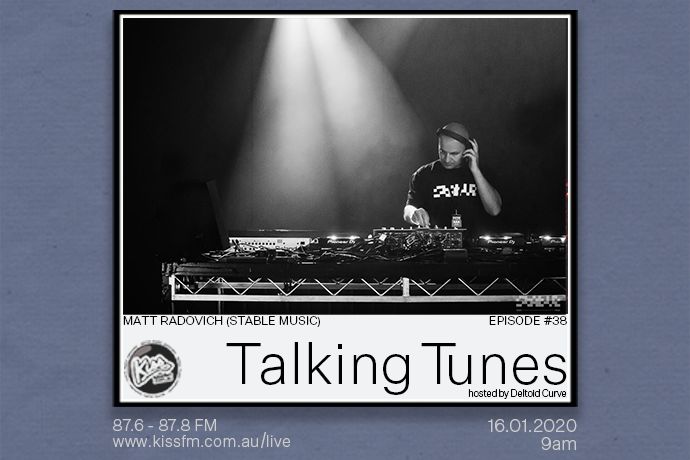 Don’t miss Talking Tunes tomorrow at 9am where we have local veteran Matt Radovich taking us through the tunes that have inspired him to become a powerhouse of Melbourne techno!

Matty is one of the founding members of the Infamous MTC Crew (Melbourne techno collective). MTC have been a cornerstone in the Melbourne techno scene and have been running for over 17 years now. Due to the success that MTC has had. Matty has then gone onto support the likes of Aphex Twin, Laurent Garnier, Juan Atkins, Jeff Mills, Orbital live, Galaxy 2 Galaxy and Timeline (Underground Resistance), Marco Carola, Surgeon, Planetary Assault System Live, Miss Kittin, Stacey Pullen, Mike Humphries, Sandwell District (Regis & Function), Oscar Mulero, Ricardo Villalobos, Kevin Saunderson, Redshape, Technasia, Cave, Adam Beyer, Justin Berkovi, Derrick May, Kazu Kimira, Richie Hawtin, Green Velvet, Carl Cox, Collabs (Speedy J & Chris Liebing), Steve Rachmad, Vitalic, Detroit Techno Militia, Space Djz, Ben Sims and many more at large techno events around Melbourne. MTC parties are based on fun and good music and if you have never been to one, you should get yourself there to see what the fuss is all about.

Not just restricted to Melb Matty has played all around Australia including Adelaide, Sydney, Gold Coast, Hobart and even Sri Lanka, strange but true! For the last 3 years, Matt was lucky enough to live out one of his life long dreams. He got to play his beloved TECHNO at the home of TECHNO, Detroit USA. Matt was asked by the Detroit TECHNO Militia to play at the Bang Tech 12 Anniversary party. This party is the warm-up party to the Movement Electronic Music Festival in Detroit (DEMF – Movement) and Matt got to share the decks with some of the cities and the worlds finest every year.

Matty Radovich was fortunate enough to be handpicked to be the support dj for Dj Shadow’s Outsider show in Melbourne featuring the Gift of Gab at the Forum. But it doesn’t stop there, Matt was also asked to support the one and only Grandmaster Flash, under his alias Mike Hunt. Matt has also been asked to support Common at a Red bull Racing Gala party. Obviously Dj Shadow liked Matty, because Matt was also asked to support Dj Shadow and Cut Chemists together on the Hard Sell tour at their Melbourne leg of their tour of Australia. Matt was also asked to join Dj Shadow and Cut Chemist again at their Melbourne Show of the Renegades of Rhythm tour. Matt was asked to open the show for the infamous Wu Tang Clan. Matt has also supported the likes of many great funk, hip hop, electronic and dance acts like Flying Lotus, Gilles Peterson, Dj Krush, Amp Fiddler, Gaslamp Killer, Clark, Dam Funk, Scuba, Ras G, Africa HiTech, Claude Von Stroke, Hudson Mohawke, Harmonic 313, The Platinum Pied Pipers, 2manydjs, Cassius, just to name a few.

Check out Matt when he’s behind the decks you won’t believe your ears, but one thing is for sure, he’ll keep you dancing all night long all night!
And he’ll keep Talking Tunes all morning long with show host Deltoid Curve (aka The Cush) tomorrow morning on Kiss!
www.kissfm.com.au/live
or download the Kiss FM app
ANDROID
iPHONE

Head to the KissFM events page for more info…