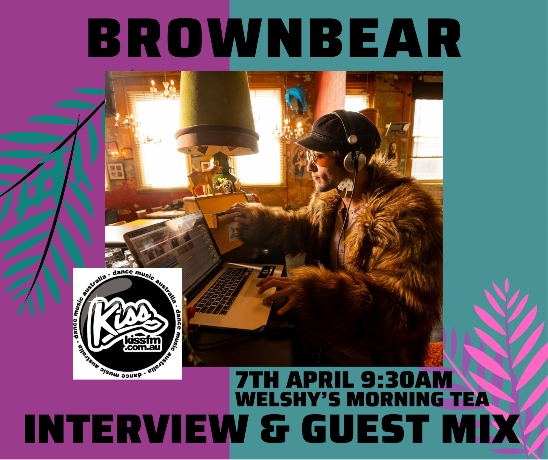 Join Dan Welsh this Wednesday from 9:30AM, as he invites Brownbear into the studio for an interview and a guest mix! Brownbear is a local powerhouse of everything deep & funky, and it will be a pleasure to hear what he has in store!

“Having made his debut behind the decks in 2014, BrownBear has quickly developed into a fixture of the Melbourne house/techno scene, with his unique sound seamlessly combining psychedelic grooves & melodies with infectious basslines. BrownBear’s dedication to electronic music and energy behind the decks has gained him residencies at internationally recognized audio institutions Killing Time Bar (KT) and Revolver Upstairs. KT is where his collective/boutique label Hindsight Music, who have been lucky enough to call Killing Time their home for 4 years now, run their weekly Friday minimal & tech night “OVER”. Aside from being regularly featured on line-ups for renowned Melbourne dancefloors such as Day Spa @ Pawn & Co, Onesixone and Circus Sunday’s, he is also an integral part of local crews Pelican Villa & Melbourne Dance Music Academy. After playing his debut set at one of the infamous Breakfast Club day parties, a warmup set for German maestro SuperFlu at UNO Danceclub soon followed. He has since been asked to warm the dancefloor for international powerhouses such as Andhim, Patrick Topping, Shiba San & Madmotormiquel as well as being invited to play at various festivals across Australia and New Zealand.”

Find more of Brownbear on his

Catch Welshy’s Morning Tea every Wednesday from 9AM!