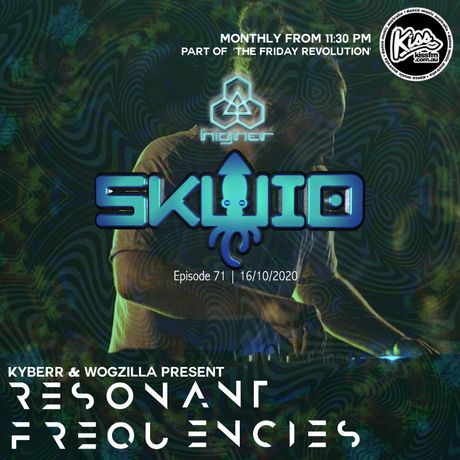 For our upcoming broadcast this Friday night on KissFM, we are joined by the head of Higher Recordings, Tom AKA Skwid! Tune in this Friday night, 16th of October, starting at 11:30 PM (AEST) as we chat with Tom about production, different genres, new releases on the label and much more!

Growing up between South Gippsland and the Bayside of Melbourne city Tom Parker’s upbringing was fully immersed in the love of music, married with a deep affinity for the wilderness. Reared in a musical household, Toms mother taught music professionally, while his father’s diverse tastes led to an appreciation and passion transcending many genres.

From an early age, Tom played musical instruments and by the age of 10, he had already begun his life long love affair for creating original electronic music. With many years of explorations into music creation, Tom is now skilfully combining many different elements of sound, to express the depth of his soul and bring a fresh-tasting original psychedelic trance to the dance ground.

2016 witnessed Skwid’s explosion onto the Australian psychedelic scene, playing most weekends across the country and releasing his debut single “Transition” to the emerging label Higher Recordings.

Throughout the past two years, Skwid has consistently played in Melbourne and around the country, and also featured on festival line-ups such as Infinite One [New Zealand], Rainbow Serpent, Babylon, Earth Frequency, Rabbits Eat Lettuce, Ergot Gathering, Psyland, Lunar Dreaming, Psylanguage, Orin-Aya, Elements Festival, and the inaugural Entropie Festival in north-west Germany.

His release with label-mate Wild titled “Singularity”, topped the Beatport Psy-Trance release charts for 7 days, an achievement repeated with his remix of Zone Tempest’s “Synergy” released on Higher Recordings in December 2017.