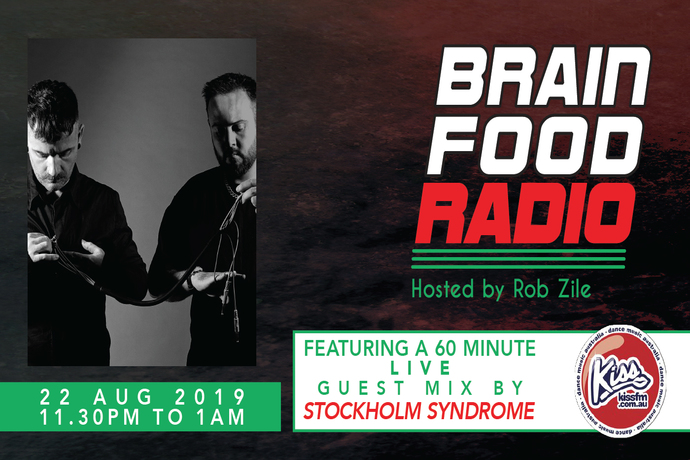 Stockholm Syndrome are a DJ/producer duo based in Melbourne made up of Scottish born Iain Mac (aka Pyz) and Australian Brett Wilson (aka Wil-tron). The unlikely duo, recognising their similar tastes came together to form Stockholm Syndrome in late 2013 after DJing at the same party.

Hailing from Edinburgh, Pyz has been DJing and promoting for over a decade. With residencies at Split, Access and We… Electric he’s supportedDJ Hell, The Hacker, Ivan Smagghe, Popof, Surgeon, Agoria, Luke Slater, Derek May and Kevin Saunderson to name a few. After moving to Melbourne he formed Stray in 2012 and has been heavily involved in Yaldi Boomtime as resident and co-promoter.

Wil-tron discovered electronic music after dropping out of a Fine Art degree and a friend introduced him to artists such as Dopplereffekt, Aux 88 and Anthony Rother. He started producing his own tracks and made his debut performing live at Melbourne institution Meccanoid. Since then he went on to perform at various clubs such as Boney (then Pony), The Mercat and the infamous Honky Tonks supporting the likes of Legowelt, Bangkok Impact, DJ TLR and Modeselektor.

Stockholm Syndrome’s style varies widely and unapologetically, it can’t be neatly wrapped up into a single genre. They’re drawn to dark, moody, sub 120bpm techno, the energetic, raw and powerful Mex-tech, the Slo-Mo and the Balearic, Drug Chug and the strange. Since their debut at Section 8 in Melbourne, they’ve gone on to clock up an impressive gig list DJing at many of the city’s iconic venues including Revolver Upstairs, New Guernica, The Liberty Social, Boney and The Mercat.

2015 saw the boys play an inspired closing set at the inaugural Piknic Electronik Melbourne, a twisted, genre-bending set at Unfold/001 and their first two original productions have been well received by other artists such as Gemini Brothers, id!r and Death by Repetition.

2016 started off with a bang when they opened the Sunset Stage at RainbowSerpent Festival, widely regarded as one of the best music, art and lifestyle festivals in the world. This was quickly followed-up with a return to Piknic Electronik Melbourne where they performed to a sell-out crowd warming up for The Hacker. They also rounded out a big year with an appearance at Strawberry Fields Festival along with the support for Carl Craig on New Year’s Eve.

Stockholm Syndrome continue to keep themselves busy gigging around Melbourne, curating the monthly ‘Hostage Radio’ podcast and interview series, putting on their own ‘Cognitive Dissidence’ parties and co-running the recently launched ‘Tilt Shift’ events. On top of this the pair have been focusing more on producing and remixing with their debut EP ‘Drowning Zombies’ released on Nein Records (UK) in November 2016 a remix of Dan Solo + Le Blanc Casanova also on Nein released in May 2017 followed by another for Tronik Youth released on Roam Recordings (USA) in June. 2018 already promises to be a big year, returning to Piknic Electronik and a number of original productions and remixes already signed and scheduled for release early in the year.

Check out Stockholm Syndrome’s music below then listen to Brain Food Radio this Thursday night for their LIVE guest mix!