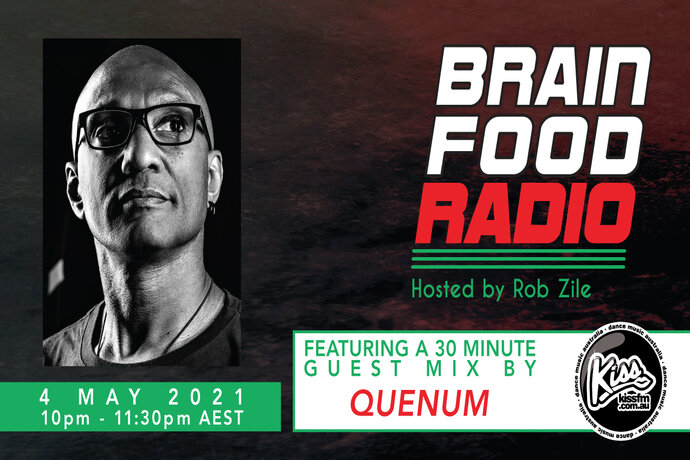 A lover of music in all its forms, QUENUM has an established 30-year career and has gained the respect of techno pioneers as well as the following of the younger generation.

When QUENUM settled in London in the 90s he started working with Paulo Nascimento, a studio musician and sound engineer. In 1997 they released their first EP on Pacific Records – that is how Access 58 was born. They performed live and played DJ gigs at all the legendary London clubs, such as The End and the Velvet Rooms, for Carl Cox’s Ultimate Base nights. Access 58 collaborated with major artists of the 90s, such as The Advent and Umek and released over 30 EPs on various labels including their own (also called Access 58).

In 2001 QUENUM moved to Switzerland, where he soon met another talented artist with whom he would make history, Luciano. Together, in Luciano’s studio in the Swiss mountains, they composed “Orange Mistake” – recognized as one of the anthems of techno music. But when they approached various labels to release it, no one was interested. That’s how they started their own label, Cadenza. Soon after Luciano moved to Berlin, becoming the label’s boss. From his base in Geneva, QUENUM continued playing all the big clubs in the US and Europe – especially with Cadenza in Panorama Bar where they invited Apollonia, Thomas Melchior, Loco Dice – riding the wave of interest that “Orange Mistake” generated.

QUENUM continued solo on his path for the perfect beat. What’s said most often about his music is “elegant”, “warm” and “deep”. In the next decade he continued producing groovy techno released on all the top labels (incl. Transmat, Crosstown Rebels, Cocoon, Fabric, Get Physical) and playing clubs all over the world. Above all, QUENUM is a classic DJ whose primary concern is to bring the dancefloor alive and ensure everyone leaves the club happy and fulfilled. His love for the groove was nurtured in his music-filled Afro-Caribbean home. When the hip-hop wave first arrived in France, he went crazy for it and became one of the country’s most skilled break-dancers (all his brothers are top dancers too). One day, when he was 17 years old, he went to visit his uncle who worked as a security guard for the Palace nightclub in Paris. That experience cemented QUENUM’s love for the dancefloor and nightlife. Around the same time, he saw DJ DST perform with Herbie Hancock at the Roxy club in New York and then he knew that’s what he wanted to do. And he’s never diverted from that path.

Fast forward to the 2000s and you will find QUENUM playing all over the world. Standout releases include: Agbaja EP on Butane’s Alphahouse label (2007) / Captain Deutschland 2 on Dandy Jack’s Ruta 5 label (2010) / Dachshund & Quenum, the Mammoth on Damian Lazarus’s Rebellion label (2012).

From 2013 to 2019 Quenum worked in partnership with Cesare vs Disorder. Together as Azimute they toured Asia, Australia and South America. They released Azimute on Serialism and ran their label nights in Brazil, London and Berlin.

QUENUM is known as one of the friendliest faces in techno, which explains why he loves collaborating with his brothers-and sisters-in-arms. 13 years after releasing “Orange Mistake”, he was back on Cadenza with his EP “Solitaire”, which got rave reviews on Resident Advisor. They said: “It has one of those muted beats that marked the best early Cadenza releases.” For QUENUM, each collaboration is an opportunity to learn and share his passion
with friends.

QUENUM has just one other obsession, apart from music, and that’s running. He keeps in top shape by taking his running shoes all over the world with him, clocking an average of 60ks a week.

Check out Quenum’s music below then listen to Brain Food Radio on Tuesday night for his EXCLUSIVE guest mix!