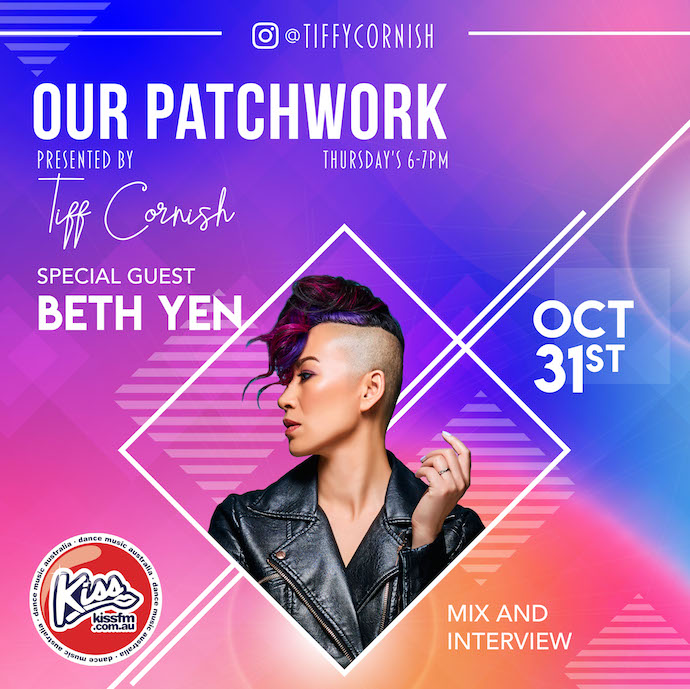 This week on Our Patchwork Tiff is joined by one of the best in the buiz – producer and DJ Beth Yen!

“Beth Yen bio For Beth Yen, the mission is quality house music. The Sydney talent has earned a reputation as one of the best new names in electronic music. As a producer, she crafts tracks that are upbeat, melodic and sometimes deep. As a DJ, she avoids flavour-of-the-month hits in favour of sets that take the crowd on a journey through house music. Whether in the studio or behind the decks, Yen’s devoted to giving the genre she loves the respect it deserves.

The approach is working. In 2019, Beth Yen achieved a monumental milestone: becoming the first female solo artist to top the ARIA Club Chart since 2012. Her track ‘Ocean’ featuring The Baroness dethroned Calvin Harris for the #1 spot, making Yen only the fourth female artist in history to claim the honour.

It’s not her first hit. Yen’s previously had chart success with her remix of ‘Sometimes’ from Lo’99 plus her original tracks ‘Paradi$e’, ‘You’re Not Free’, ‘Who Cares’ and ‘Bang’, which hit #7 on the Funky/Groove House chart on Beatport and was supported on radio by both Nora En Pure and Oliver Heldens. All up, Beth Yen clocks up a mighty 22k monthly listens on Spotify and 14.6k monthly Shazams.

Her gig CV is just as impressive. Yen started 2019 strong by opening the main stage at Electric Gardens festival in Sydney, sharing a bill with Erick Morillo and Sigma. She’s already got three seasons in Ibiza under her belt, stepping up as a resident DJ at legendary clubs and parties like Pukka Up, Amnesia, Café Mambo, Café Del Mar and Pacha. At home and abroad, Yen has supported the likes of Carl Cox, Duke Dumont, Disclosure, Jamie Jones, Patrick Topping, Claptone, Faithless and more.

But with more music coming before 2019 is through, Beth Yen’s just getting started”