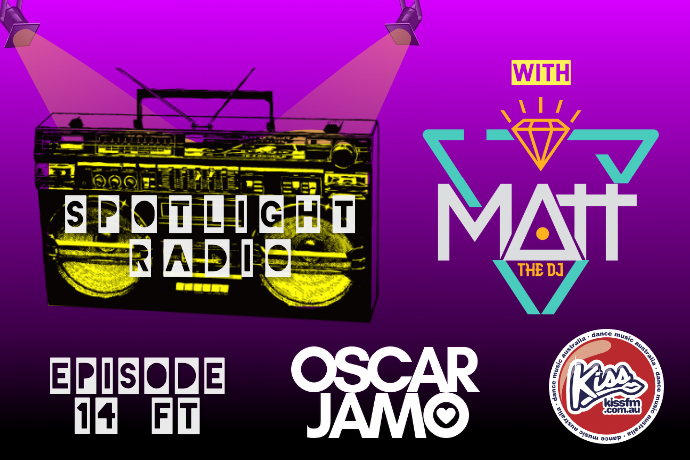 Oscar Jamo is a Sydney based DJ / Producer who has most commonly been seen as a versatile DJ for most of his career consistently playing events as well as bookings at venues such as Club 77, The World Bar, The Golden Sheaf & a Residency at Mrs Jones Bar / The Orient Hotel in The Rocks for many years. Though behind the scenes, he has been crafting his art in music production with a niche in house music.

Through the years of DJing and producing under other projects such as Allphat & Oska his love of house music has grown, along with his catalogue of unreleased house tracks. A decision was made to release music, and his new project Oscar Jamo was born. Now he has at least 5 releases lined up for before the end of 2020, with promises of completing a new EP by the end of the year. A zealous upcoming tech house artist at that and the ambition shows in his guest mix.

Q. At what point did you have the realisation, “shit, I’m actually not too bad at this”?

A. I think it’s one of those realisations that you will have many times over your career. Every time I’ve realised that I’m not half bad at mixing, it becomes the norm to me and I set my sights on the next step. Then when that next step comes, the realisation sets in all over again.

That being said, I think the first time I realised I was actually half decent at this when I started playing my first sets at Bars, Nightclubs & Music Events. I started getting praise and support from people who have been in the industry or Djing for a long while for my mixing ability which really helped build confidence in my abilities.

Q. What is the one record that you cannot leave out of any set?

A. It’s not the full track, but I can’t play a set without sampling the intro vocal from ‘Boom, Boom, Boom – The Outhere Brothers’. It’s such a good vocal to get some crowd interaction and I personally never get sick of it! haha.

Q. As a club DJ, what are some things you wish you had known when first starting out?

A. I wish I knew a lot more about the theory behind music. Being a more practical person I liked getting hands on more than ‘reading the books’, but the more I grow the more I see how essential and how much of a leg up an understanding of musical theory can give anyone.

Q. What is one genre of music you would rid the world of and why?

A. Haha, tough one. It’s hard to generalise a whole genre, but a subgenre.. I don’t even know if it’s considered a genre, but I would %100 rid the world of this new-age, mumble rap trash.

Q. What is your fondest memory as a DJ and an attendee at a party/festival?

A. One of my fondest memories as a DJ would be the NYE Headline set I played at a Festival / bush doof style event we threw at a mates property a few years back. There were maybe 150-200 people there, so nothing too big but the whole set had such a vibe. I was in my zone and I felt like every single person there was right there with me. I did the 10 second countdown and suddenly, out of nowhere (obviously I didn’t expect it), the whole place lit up, fireworks, flares, glow sticks, lasers.. you name it. The atmosphere was electric. I even think a tear came to my eye haha. I’ll never forget that moment.

My fondest memory of a festival was at Listen Out Festival in Sydney. I think it was 2016 when Jauz and Tchami sets linked up. I was with a crew of a good 20+ people, in which most were swayed to go see another artist due to clashing set times. I knew I was there to see Jauz & Tchami no matter who was next to me. So, I squeezed right up to the front of the mosh by myself and proceeded to enjoy the best 3 hours of mind bending Bass / Future House I’d ever heard and I don’t regret it one bit!

A. I was hoping this question wouldn’t come up haha, but I’m going to stand true to what I love! As embarrassing as it may be to some people I’m an avid ‘oldies’ lover… Hit me with some ‘Valerie – Amy Winehouse’ or ‘At Last – Etta James’ any day of the week!

Q. What is your pose behind the decks when playing a set?

A. Haha love it. I’ve got three semi-embarrassing dancing habits whilst DJing..

1 – ‘Fist Pump’ – Clenched Fist Soft Air Pump
2 – ‘The Lasso’ – Pointing my finger in the air, spinning my arm like I’m about to throw a lasso, then boogie in circles myself.
3 – ‘The Gunshot’ – hand in the shape of a gun, seemingly shooting things above the crows head.. but in time to the beat haha.

Q. Do you have a post gig food that you always go with?

Q. What’s it’s like trying to work your way through such a congested industry?

A. I’d be lying if I said it was anything other Tough. It’s a constant cycle of setbacks, self-doubt and hard work. As corny as it sounds, resilience and persistence is key. You need to be in it for the right reasons – it’s a long road pursuing a career in music, those who aren’t in it for the love of it may not be down for the longevity of it all.

A. One thing is for sure, it WOULDN’T be a song request haha.. It most likely would say ‘HOUSE MUSIC ALL LIFE LONG!’

Q. Thing you’re looking forward to the most about restrictions being lifted?

A. Those moments of pure ecstasy. I’m in the zone, the crowds heaving, the music’s pumping, there’s nothing but good vibes.. I’ve never been more content!

Q. What can people expect from your guest mix?

A. A whole lot of deep tech house bass lines & a lot of experimentation! I’ll never play the same set twice, so one thing you’ll always hear in my mixes is experimentation. Occasionally things may sound out of place, though it makes for some of the most unique sounds and mixes I’ve ever done! I hope you all enjoy it!