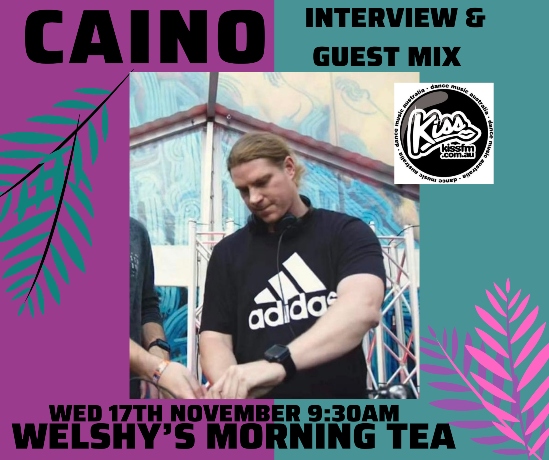 Join Dan Welsh this Wednesday morning from 9AM as he brings CAINO into the KISS FM studio for a cuppa, a chat, and a stellar guest mix! CAINO has an exciting energy on and off the decks, and is involved in a number of fantastic events. Make sure to tune in for this one, as it’s sure to be a ripper!

“CAINO is a Melbourne based DJ/Producer forging his way through some of the most iconic late night slots Melbourne has to offer. His appearances across Melbourne events as well as famed Revolver have seen him run support duties for some of the worlds largest names including Marcel Dettmann, Seb Zito and many more.

Adam Cain aka CAINO is a true music force that has been shaped by his music projects. He is one of the minds behind west side event company Don’t Think Events, music company Off Market Music, rave festival Beat Repeat and most importantly and closest to his heart burning man project Natural Curiosities.

He begun running raves in state forests in Melbourne’s North West and has continued this passion into Melbourne’s music scene supported by some of Melbourne’s most iconic music venues. His releases tend to sway more on the house side of tracks however he feels he is at his best during a late night techno slot or slinging some progressive house steamers.”

Check out CAINO on his Soundcloud HERE