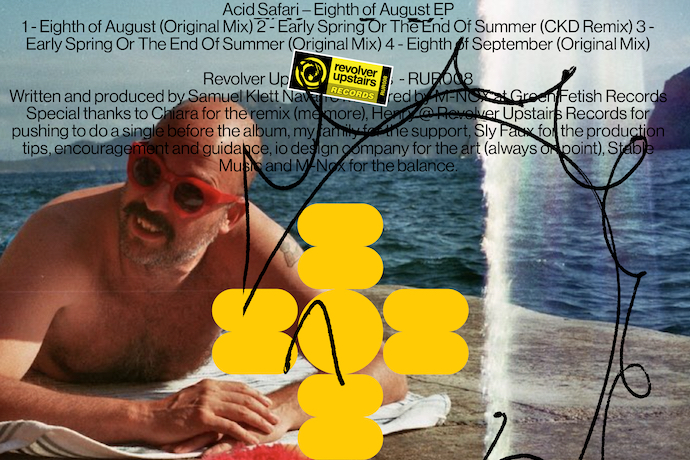 A public service announcement from ScoMo (Prime Minister of Australia)

Hello and thanks for joining me today. Today we’re talking about Acid Safari’s latest EP on Revolver Upstairs Records. Announcing a new record is not something we do every day, so I’m very proud to announce today that we’ll make that announcement. In many ways it’s a day like any other day – I am of course making this announcement on a Tuesday, but you could be reading this transcript on another day, it could be Monday, for example, considered by many to be the first day of the week, and certainly the first day of the working week for our many office workers across the country. Another contender for first day of the week is Sunday; certainly it’s the most important day of the week for many of us engaged in worship, whether that be at church, or indeed at Revolver Upstairs, Sunday is an important day. It could of course be one of the many other days that are experienced every day, around the world, each day. But that’s not what we’re here to talk about today – it’s Acid Safari’s brand new four-track EP, of which we can be very proud.

You may already have a favourite track on this EP. It could be, for example, ‘Eighth of August’, the first track, but not the only track, on this four-track EP. The eighth of August is, of course, only one of the many days in that month, of which there are many – if not August it could be October, November, December, January, February, March, April, May, June, July, or indeed September, but more on that month later – in which we can enjoy listening to this track. The eighth day is preceded each month by the seventh day of the month, and in turn these are only two days of the month in which there any many, though in this case nothing precedes ‘Eighth of August’, as it is the title of the first track on the EP… unless of course you choose to play it on shuffle, a feature of the many digital audio playback applications, of which there are many: whether it be Spotify, Apple Music, Deezer, Tidal, Google Play, or indeed Bandcamp, where you will find all of our releases on Revolver Upstairs Records, and in turn whether it be one of the label’s many other releases, including Acid Safari’s ‘Modal EP’, another musical work of which we can all be proud. That release appeared last year, of which there are many, on November thirteen, another of the many days each month. But that’s not why we’re here today, we’re here to talk about Acid Safari and his EP.

Of course, all of this says nothing of Chiara Kickdrum’s incredible remix work for ‘Early Spring or the End of Summer’ – and I’m not even talking about the original here, of which we can also be proud. In this case I’m talking about the remixed track, not the seasons, though if we were to speak briefly about the seasons, early spring is of course noteworthy as the first part of spring – distinct from the latter part of spring, and more so from the other seasons, such as Winter, or indeed Autumn, which you might also know as “Fall,” depending on where you come from in the world – it could be North America or Canada, for example, or one of the many nations around the world in which this track, and others, are available on streaming outlets, the details of which will of course be made available to you in due course.

Upon listening to this remixed track it’s quite clear that Chiara has taken elements of the original track and combined them with additional instruments. One of those instruments is of course the drum machine, an incredibly powerful instrument of Electronic Dance Music, and an instrument that inspires us all. In turn, that instrument is made up of many drums – in many ways it is a collection of discrete drum sounds, operated by a machine with a sequencer – a drum machine in the truest sense of the word. Those sounds might include the kick drum, otherwise known as the bass drum, a term that describes both its function and frequency. In addition to the bass drum it could accompanied by the snare drum, a drum that inspires us around the country, or the hi hat, a drum sound that appears on some of the many inspirational tracks, both on this EP, and around the world of electronic music, and indeed beyond: the hi hat appears in pop music, in funk, in rock, and indeed in any style of music featuring a drum kit, of which there are many.

Still, there is much to be proud of on this record. Acid Safari’s other track is ‘Eighth of September’, not to be confused with the track ‘Eighth of August’, which is, of course, another track on this EP, and in turn a track that also makes reference to the eighth day of one of the many months each year that features a day on the eighth. While I’m here, can I just say that the “eighth” is a day that presents many challenges, but we will of course rise to those challenges. One of the most evident challenges lies in its spelling. The number of times the letter ‘h’ appears in the word “eighth” is immense, and for anyone typing this press release, as I am today, it presents an incredible challenge to ensure that the rollout of that letter is not executed too quickly – it’s not a race! Accordingly the rollout must be very deliberate, and in keeping with the expectations of both the artist, Acid Safari, and the label, Revolver Upstairs Records, and indeed you, the reader, and hopefully also the listener. Notwithstanding the spelling of “eighth,” and the additional undeniable challenge we have ahead of us in fitting this lengthy text into a very small space on your screen, the fact remains that we will rise up to meet that challenge. I’m very confident today that if we all do our bit, and together we proceed to the online retailers and streaming services, of which there are many, and if we can find the resolve to listen to these tracks, of which there are four, and even go so far as to save them, favourite them, share them, listen to them, and indeed buy them, then we can be very proud to engage with these works. Thanks for your time today, that’s all we have time for.