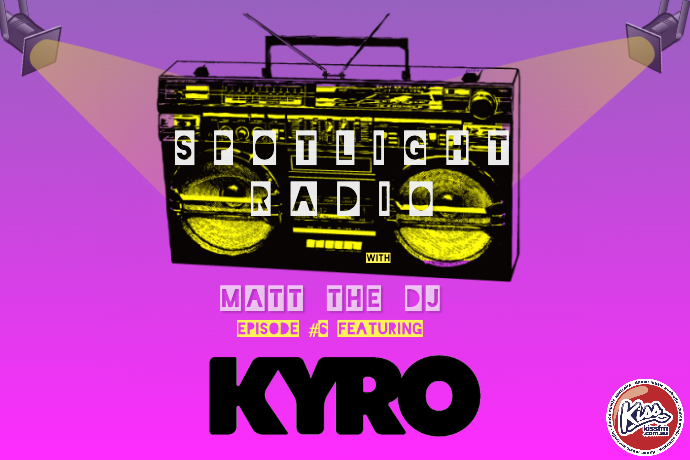 Bringing it back home this week with the feature artist for Episode 6. Kyro has been on the scene before you could say the scene was even a scene…what? Growing up he was a keen gymnast and was quite handy on the soccer field, alas he found music production and further went onto electronic music. Since the day he heard his first kick drum Kyro has been one of the most recognisable names in the Australian dance music industry. Holding down residencies at 2 of Sydney’s most iconic venues Home Nightclub & IVY. As well as that he has multiple ARIA chart toppers including a #1 in 2015. Don’t miss a chance to listen to a man in his element in this guest mix. Check out the full interview below and make sure to tune at 6pm Monday.

Q. Where did things start for you as Kyro and what is your quest?

I come from a pretty musical family, I’m more on the tech side rather than the instrumental side, so i’ve loved music from a young age. In fact pre-covid, my dad, mum & sister all held down residencies doing our thing from singing to djing. The quest still remains the same; “Find the Jade Monkey, before the next full moon”..

After 11 years of djing some of them are very blurry and blend into many others. As an attendee i’ve had many, Daft Punk 2007 Tour (homebush), Fake Blood, Sinden & Trentmoller at the Metro 2009 to Parklife, Future Music, or Stereosonic, I mean Australia can really throw a party when it wants to.
As a Dj probably warming up for Justice in 2018 but every gigs different for it’s own unique reasons..

Q. Your recent release Mind Funktion is in an absolute pearler, how did it come about?

So I’m obsessed with vocalist like Tiga or Green Velvet, they have this way of “sing speaking”! I do Voice Overs for radio & TV commercials so I’m handy with my voice. The song Your Mind by Adam Beyer & Bart Skills has resampled this old CAN – Vitamin C song, it’s catchy and a certified banger. I really try to create something that sounds like it might be a vocal from an older song or fit within the frame of what is perceived as ‘Dance Music’. Honestly, I just sit there with my iPhone, voice memo’s as my first app on homescreen and record stupid catchy, silly nonsensical things the second they pop into my head. There’s too many of them and listening back years later they make no contextual sense.

Q. What is one sub-genre you think doesn’t get the attention it deserves?

I think if a sub-genre started getting attention it hadn’t previously then there would be a bunch of people super disappointed that ‘the thing they found is mainstream now’ haha so it’s such a double edge fork when it comes to sub-genres or even lesser known artists. I like following artists more like Skrillex, Noizu & Dombresky. Largely cause they’re innovators that retain their essential sound.

Early days I never played my own music cause I was scared people would hate it, 2-3 minutes presenting anything to anyone can seem like a lifetime. But after a while you realise there’s not as much joy in just playing other peoples music. So now my sets flow around my music and what I like. I like to think my skills as a Dj take over during performance time. I like to be like water, never planning set lists always being flexible. So i just back myself to have fun and if you f*ck up that’s good too, own it, it’s a great opportunity to have a human moment with your audience.

Hide & Seek – Imogen Heap, When You Say Nothing At All – Ronan Keating, Taylor – Jack Johnson or anything Matchbox 20. I listen to everything but growing up in the 90’s/00’s I listen to Tupac, G-unit to My Chemical Romance to The Corrs like there’s no reason to only specifically listen to one style or genre or artist. Closes you off too much to new things!

I know people hate this but it’s the Echo Effect ahah I think it can be used really poorly but it’s just one of the knobs that helps execute a few other things like adding to build or scratching (which I suck at lol).

So I think it’s the Cormorant as it’s one of the only creatures that can walk, fly & swim which I mean, I don’t think that needs further explanation. My girl Kate & I have been WIRES volunteers for 1.5 years now so we absolutely adore animals of all types!

Q. What is the one thing that you love the most about your scene?

Probably the friends I have made. You do things with people in this industry that is something not a lot of people get to experience ever. You travel together, eat out each others pockets and be one another’s sounding board.  So bonds form that are un-explainable.

Q. Who has been your favourite producer to collaborate with?

Myself and Alex Preston have written a couple of jams together and touching on previous question created quite a tight companionship. A-tonez is my best mate, we lived together, travelled around Aus for 50 odd shows together & share the exact same birth date so there’s a very spiritual connection between us.

Q. How many tattoos do you have and what’s your favourite?

Was set to get another in April but alas old mate Covy D has but a pause on that. I’ve got 5 so far. I don’t have a fav but i’m actually telling a tale through them haha
I don’t rush into getting them all at once, they have to be thought over and vetted before I move to the next phase, it’s oddly one of the things i’m most patient over. Probably cause my mum hates them and I hear about it ever time I get a new one!

Q. How do you see the scene after this whole Covid-19 shit goes away?

Bear with me, I need to locate my emergency crystal ball, the other 2 broke haha

I don’t know, I imagine like most things there will be a few that lose interest or fall outta love with it due to the lock downs or maybe find a new job that demands so much time that they just can’t juggle the two. I think Australian Artists stand to benefit the most. It appears our Country is coping better then some other 1st world countries, if interstate travel bans lift and perhaps Aus to NZ & back becomes an option it’s hard to imagine big name acts coming here straight away (from US or UK) just to spend 14 days in isolation before performing and then leaving not to mention the value of our dollar. You’d be ludacris to pay someone US$ money rn and can Aussies afford $400 Ed Sheeran tickets..? I’m hoping small pubs, bars & clubs benefit, they’re the grass roots for the whole shabang anyway imo..