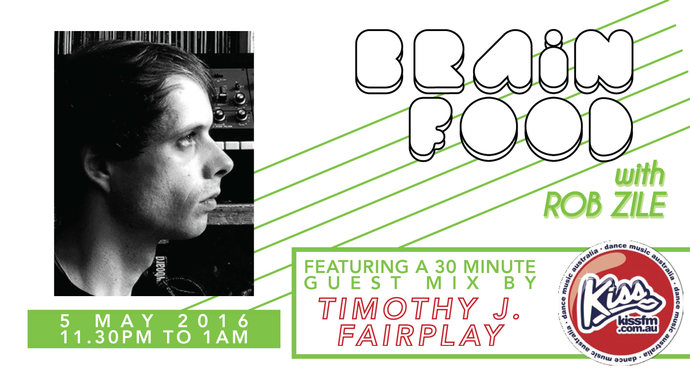 Asphodell, Scrutton Street axis alumni, Centurian of Rome, Junior and advocate for Crimes Of The Future Timothy J. Fairplay has for the past ten years adopted many monikers and musical guises. Whichever way you choose to address him however one thing is for certain, that Tim has crafted a sound something unique. Whether you know him as 50% of The Asphodells alongside Andrew Weatherall, as co-founder of club night and label Crimes of the Future alongside Scott Fraser or simply for his solo production prowess Tim has become a firm fixture of the electronic music scene over the years.

Originally transitioning from indie to the world of house, techno and electro as a youth working in record shops Tim first became inducted into the ’Scrutton Street Axis’ in 2006, sharing a recording space with Andrew Weatherall and Scott Fraser and making a foray into cosmic endeavours from then on. Helping to craft the sound of Weatherall as his studio engineer Tim then joined forces with the man himself to create 2013’s ‘Fuelled by Passion, Destroyed By Lust, the first full length under their The Asphodells moniker. Critically acclaimed by everyone from The Guardian and The Quietus to Resident Advisor and XLR8R the LP placed itself firmly in the outer edges of cosmic funk, Krautrock and psychedelic weirdness, bringing with it a cult-like status amongst fans old and new in the process.

Crimes Of The Future, the joint label and club night between Tim and Scott Fraser, was born in Glasgow’s The Berkeley Suite and since then has spawned a monthly residency at London’s Corsica Studios and welcomed its tenth release in 2015. In that time the likes of Perseus Traxx, Antoni Maiovvi, Black Merlin and Haunted Doorbell have all been inducted into the Crimes Of The Future catalogue with more releases set to show up throughout 2016 and beyond. Not content with simply being promoters of rave fodder Tim and Scott are also a production, DJ and live outfit having taken COFT across the UK and beyond, while Tim has provided dancefloor material for Fabric, Robert Johnson in Offenbach and Output New York to name a few.

Aside from his many collaborations Tim’s solo output has been welcomed throughout the years by Charlois, Astro Lab Recordings, World Unknown, Bird Scarer and Emotional [Especial] to name a few while Tim’s lone label ‘Centurians Of Rome’ has recently celebrated its 4th year, something which spawned as a cassette only label but has recently put out its first vinyl release in 2015.

Tim has a busy release schedule for 2016 including the ‘My Etherrealrealness’ EP just out on Charlois, and his collaboration with Alessandro Parisi as ‘Dynamite Winter Palace’ just released on Knekelhuis A Parigi. And an album coming out in the Autumn. Next up is ‘The Cat Prowls Again’/‘A Strange Servant’ 7” on Hoga Nord.

Check out Timothy J. Fairplay’s music below then listen to Brain Food this Thursday night for his exclusive guest mix!