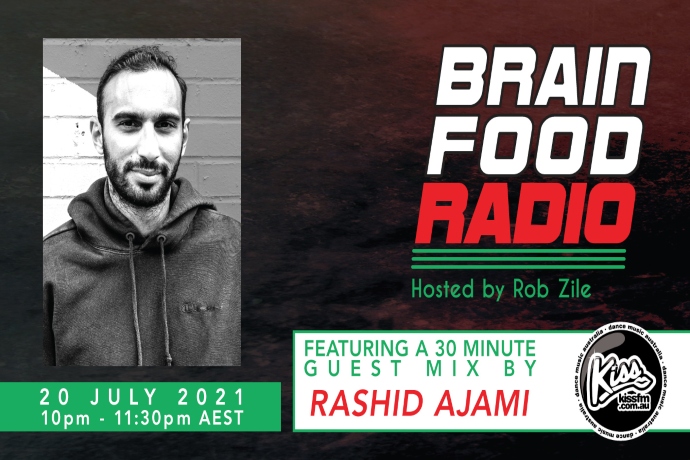 A natural gift for a memorable vibe and a need to dance and make others dance marks out DJ/producer/musician Rashid Ajami’s music and sets, but just as he rejects music genres, his talents cross artistic boundaries to include a planned programme of digital artworks, installations and cutting edge multi-media creations.

Since his emergence in 2012 was instantly spotted by the likes of Maya Jane Coles and Ramon Tapia whose remixes featured on his first release, Rashid has steadily released critically acclaimed tracks on labels such as AnjunaDeep, Eklektish, Einmusika and Noir. He and Julia Govor released ‘A Regret’, a much admired four tracker, while 2017 saw his collab with Nathan Daisy, ‘Dance Pain’, on Noir’s Dark Stars 003 Compilation and singled out by Pete Tong for BBC Radio 1. DJ gigs included Mysteryland festival, New York’s Marquee et al.

Last year he added Get Physical, Tube & Berger’s ZEHN, Tale & Tone, and Blufin to his imprint portfolio, putting a renewed wholehearted focus on music after the multitalented producer, unusually, took a brief break from the DJ booth to build a successful tech business.

Now having achieved material success and a solid back catalogue of releases, Rashid is passionate about producing music for its quality and ability to inspire dreams and emotion. ‘If I can achieve that goal with even one listener, I’m happy. I want to be true and honest with what I make.’ As a DJ, he loves to play long sets, around 6 hours, to craft the best and most emotionally resonant journeys for the crowd, while at the same time choosing records for their dance vibe – if a track makes him feel like dancing, it’ll get the crowd moving too. Reluctant to be pinned down to a genre, style or niche, he allows his music to evolve naturally.

Appropriately therefore, though obsessed with music since childhood- playing piano and violin since he was 8 – he loved all genres and rejects the idea of any specific influences. ‘I used to freestyle, breakdance and bought my first techno album at 12! I still freestyle for my friends over a hip hop instrumental when we are chilling.’ At university in the US, he began making his own music through such simple beginnings as Garageband and Logic, finding that his natural talent and feel for a vibe resulted in tracks which made a lasting impact.

Now in talks with big name galleries, Rashid plans a suite of original digital artworks with music: some big scale multimedia immersive installations involving other artists are also in progress. There will also be an intriguing series of limited vinyl releases as artwork. With an increasingly exciting year ahead full of new releases and new terrain to explore as DJ, producer and artist, 2021 marks a musical renaissance for Rashid Ajami.

Check out Rashid Ajami’s music below then listen to Brain Food Radio tomorrow night for his EXCLUSIVE guest mix!