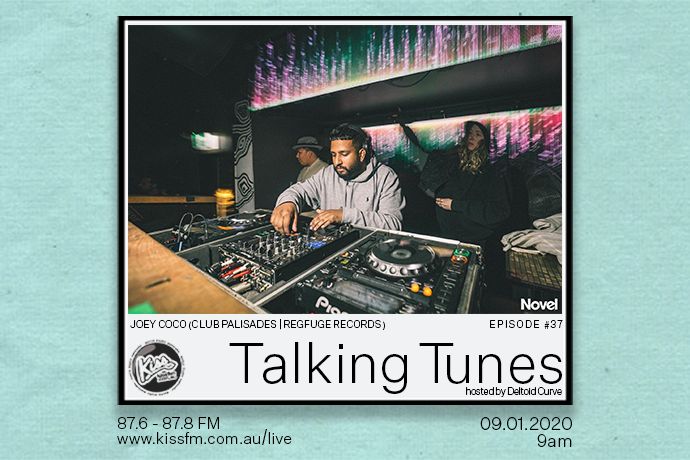 This week on Talking Tunes we have a purveyor of anything soulful, a deeply rooted Melbourne brother who quite simply has a passion for everything about music… the one and only Joey Coco!

Sporting an astonishingly seamless mixing style with incredible music knowledge. You’ll find him melding house, techno, and disco together with a signature hip-house flare. Joey cut his teeth as a member of one of the hardest working hip-hop bands in Australia, touring nationally and internationally.

Our guest inevitably gave in to his childhood love of House music. Which not only took him to perform at some of the biggest clubs and festivals across the country, but also saw the birth of the Club Palisades brand. Hosting a string of expertly curated parties based on the principles of hip-hop, house and everything in between at some of Melbournes most iconic venues.

Last year saw the introduction of production into Joey Coco’s repertoire including his debut club release on Refuge Records. Combining years of experience in songwriting and performing across a huge range of genres with his unique soulful flavour. Including influences ranging from Robert Hood and Moodymann to Nas and D’Angelo – there is a true sense of spirit found throughout his music, which he cannot wait to share with the masses.

This has all culminated into the distinct Joey Coco sound which delivers a touch of soul, breaks and vintage sampling fused with the classic electronic style that has garnered the adoration of him and his peers.

He’ll be on-air and via Facebook Live this morning from 9am talking to host Deltoid Curve (aka The Cush) talking about the tunes that helped make him one of our local legends!

Head to the KissFM events page for more info…