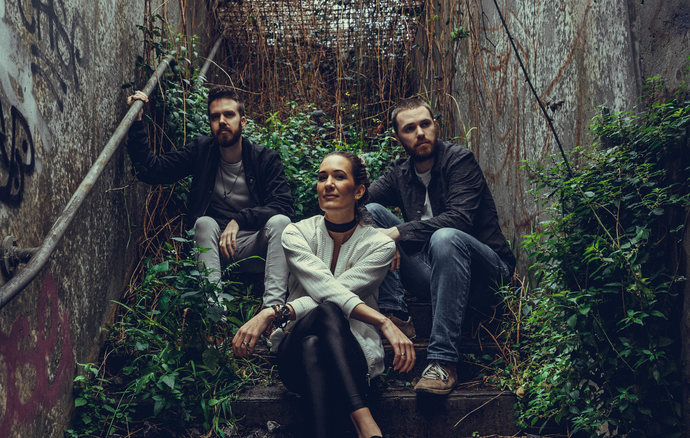 It’s been a big year for Melbourne based, self-professed, galactic soul breaks trio PASSERINE. Phoebe Dubar (vocals, viola), Ben Murphy (live production) and Alex Gooding (drums) are rapidly establishing themselves as an act to watch with their organic/electronic sound, a combination of dark, glitchy beats and swirling synths, driven by catchy pop hooks and soulful vocals.

In late 2015 they were named as semi finalist in the International Songwriting Competition with their stand alone single Set Me Alight, which was also named Channel V’s DISCO(V)ER clip earlier in the year. After featuring on the summer festival circuit (St Kilda Festival, Moomba, Australia Day, Roar Festival Dubbo) and embarking on two east coast tours, the trio delivered their sophomore EP, The Morning After /The Night Before. The 5 track EP featured single Look Up and their bombastic, electronic reworking of Fleetwood Mac’s Tusk. Synthetic Heart saw the trio move in a slightly different sonic direction, and for the first time they produced and recorded it themselves.

Released in June, it was incredibly well received both in Australia and abroad:

“Groovy and amorphous, “Synthetic Heart” is a collection of celestial sounds that undulate through spacey chords and body-shaking breakdowns.”(Indie Shuffle)

Coming months will see PASSERINE back in the studio completing their third EP, due for release in early 2017.

Summer will see them hit the festival circuit, including Folk, Rhythm and Life Festivaland Panacea Festival, and supporting Tkay Maidza at her Australian Open performance. Join PASSERINE as they continue their journey of great music, dynamic live performances and all-round good times.