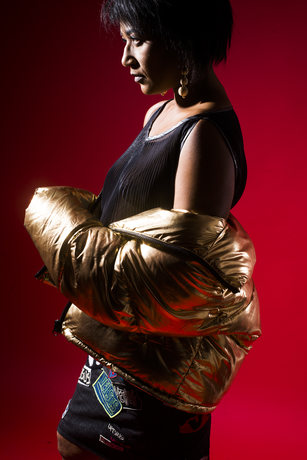 Lady Erica first took to the turntables professionally as DJ Venus on UK pirate radio station Fantasy FM alongside DJ Felix on the Sunday Joint show from 1991 until 1993.

In 1995 she moved to Australia and was one of the first DJs to play Jungle in Western Australia. As Jungle morphed into the polished sounds of drum and bass and seemingly lost its raw, jump up edge Lady Erica’s moved into the soulful and high energy sound of speed garage – “the tunes that move your waistline…with a driving bassline”. At the same time she moved to Australia’s East Coast.

Now based in Melbourne, Lady Erica established Australia’s longest running weekly UK Garage night at the Double O. One of the first Melbourne laneway joints, a basement club hidden away in the city’s back alleys from 1998 – 2002. In the early days with no money for advertising, most people often found it by accident.  However that was to change…

After six months of playing the graveyard shift (2am-6am) on a local radio station Lady Erica did a fill-in Fright night show which led listeners to write in to the station’s management and request to hear more from her. She was given a permanent slot.  Her show Underground Flavas broadcast every Saturday night from 10pm til midnight from 1999 – 2005 on 3RRR 102.7FM reaching outto  millions of listeners.  It was at a time when mainstream Australian radio didn’t play any dance or R&B music at that time of night.

The show’s format, was very different to other radio shows as she went back to her pirate roots, with minimal annoucing, an emphasis on live mixing and shouts outs to listeners.  The early 3RRR studios were not really equipped for live mixing with no DJ mixer, she simply worked with what she had using the studio desk as a mixer!

From 2000 – 2008 Lady Erica established Show Pony Music, distributing UK Garage, Grime and Dubstep vinyl, CDs and DVDs across Australia and was an important part of bringing the sound into the country.  Show Pony Music along with Underground Flavas ensured that not only did the music get heard but was not miscategorised by the Australian music industry as Drum & Bass or the catchall ‘electronica’.  From the likes of Tinchy Strider, Roll Deep, Crazy Titch, Dizzee Rascal, Wylie to Qualifide, MJ Cole, Tuff Jam, Horsepower Productions, and Digital Mystikz, all benefited from her love for the music.

Lady Erica is currently the music curator and programmer at Loop Melbourne home of a custom built DJ friendly Void Sound System – the main system used by clubs in Ibiza. She is also a board member of the Melbourne Electronic Sound Studio (MESS) which houses a world class collection of working synths.

*This is known as the Heirloom Collection and spans 1960s – 1990s Jamaican, American and British Jamaican music.