FRICTION welcomes CHARLES OLIVER from COMPATIBLE MUSIC. Charles is no stranger to the Melbourne scene and is a favourite on the local bookings, we at Kiss FM are interested to see what he brings for the Wed night set on Friction.

Charles Oliver is without a doubt one of Australia’s most exciting breakthrough talents right now. His music and performances are thick with power and journey, fusing his love of complex analog synthesis, crunchy hypnotic Techno, blending with tribalistic House rhythms.

From the young age of 23, Charles has had a slingshot trajectory, giving him the opportunity to perform at some of the most recognised Australian Clubs, Events and Festivals. Highlights include – Rainbow Serpent Festival, Bohemian Beat Freaks, Babylon Festival and Earth Festival to name a few. Oliver’s debut EP ‘Heights’, hit the Top 10 Techno Chart & Top 100 on Beatport Globally. The EP has gained some special support from artists such as Laurent Garnier, Danny Tenaglia, Len Faki, Secret Cinema and strong Australian Artists such as Anthony Pappa & Jamie Stevens.

Oliver’s second Single, ‘Fragility’ – a twisted, hypnotic, techno infused breakbeat – was featured as the #1 Top Track on Choon’s front page after 2 days of being released.

2018 is already huge for Charles Oliver, debuting a peak-time performance at Australia’s renowned Rainbow Serpent Festival. Onwards, 2019 brings International Festival Dates locked-in, collaborations with some of the A-List names in Techno & House, and several forthcoming EP’s to be dropped – showcasing his finest work yet. 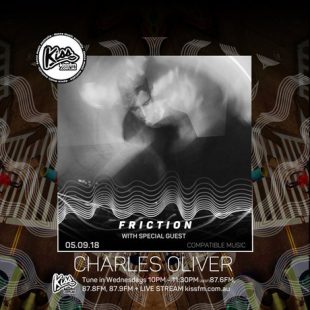 Check out last weeks episode below to keep you grooving until this Wed at 10pm, and remember to keep tuning into Friction every week as we welcome the following guests up to the Friction waves, including Andrew Wowk, Christian Kerr, Dave Juric, Fütwerk, Lask, Mittens, Suki.