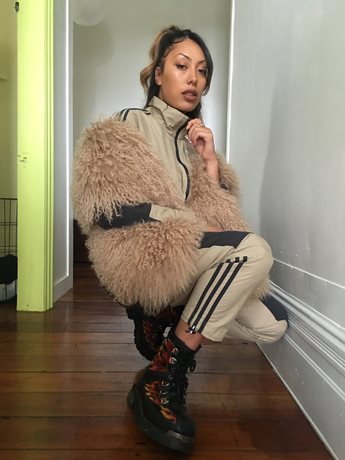 With a style not limited to one genre, but characteristic of a certain vibe, she brings together an eclectic sound to a wide range of audiences. Whether its Afro-beats, Hip-hop, R&B, Garage, Grime, Dancehall – Andrea has her own sound and is constantly fine tuning her live sets and reading the crowd.

Andy has opened for NZ fashion week, curated playlists and mixtapes for Fashion Quarterly magazine, Checks Downtown and Miss Crabb. She has held residencies with Verona bar, Shanghai Lil’s and is a frequent on monthly club night line ups and corporate events. Andy is also an ambassador for Edifier Global after her talent was recognised at Auckland City Limits festival 2018.
​

Her influence extends beyond her DJ work. As a trusted source for upcoming music, art and style, she runs Dynasty Collective with the support of Red Bull NZ backing the pop-up events she curates.

Another talented individual that Edifier is excited to be partnering with is New Zealand creative and DJ  Andrea Orani aka DJ Andy Heartthrob. Edifier first recognised Andrea’s talent after featuring her at the silent disco party during the Auckland City Limits festival in March last year.

Since then Andrea’s love for the brand has blossomed, “I’m excited too! Edifier put me on at ACL festival and that was my first festival gig. It was actually a really big deal for me to have that affirmation from Edifier and to be recognised as a DJ, so I was and still am grateful for that opportunity. The experiences I’ve had with Edifier have only been positive for me so it just feels like an easy natural progression to partner with the brand and their amazing team of people.” – Andrea Orani

Auckland raised, Andrea’s a born creative, with an eclectic urban soul who has found herself edging deeper into the music scene over the last couple of years. With music at the forefront of her work, Andrea is also the kick ass BOSS behind Dynasty Collective, a platform she has created for women of colour to freely express their creative passions. Dynasty is now the focus of her Tuesday drive show on Base FM. A significant portion is dedicated to welcoming new guests each week and celebrating their stories, art or passion projects. The hope from this is to inspire other women to pursue their dreams.

Audrey Felix is incredibly complimentary of Andy Heartthrob and is looking forward to seeing the partnership flourish, “having worked with Andy for a while now, she brings a youthful energy to the brand. Beyond her music though we are so inspired by her vision to support creative women and can’t wait to journey with her in each endeavour”.

Andrea’s passion for music stems from her parent’s love for it “​My parents always enjoyed their music, especially my mum, she would get us to nap to Enigma and Massive Attack and then we would be listening to reggae on her old speakers; she shared her eclectic taste in music with us from the jump so we were naturally attracted to the sounds from a young age.”

Following her heart Andrea is now fully committed to running Dynasty Collective and making her own music. From ​there the sky’s the limit. We know there is a bright future for this one and we are glad she is part of the Edifier family.