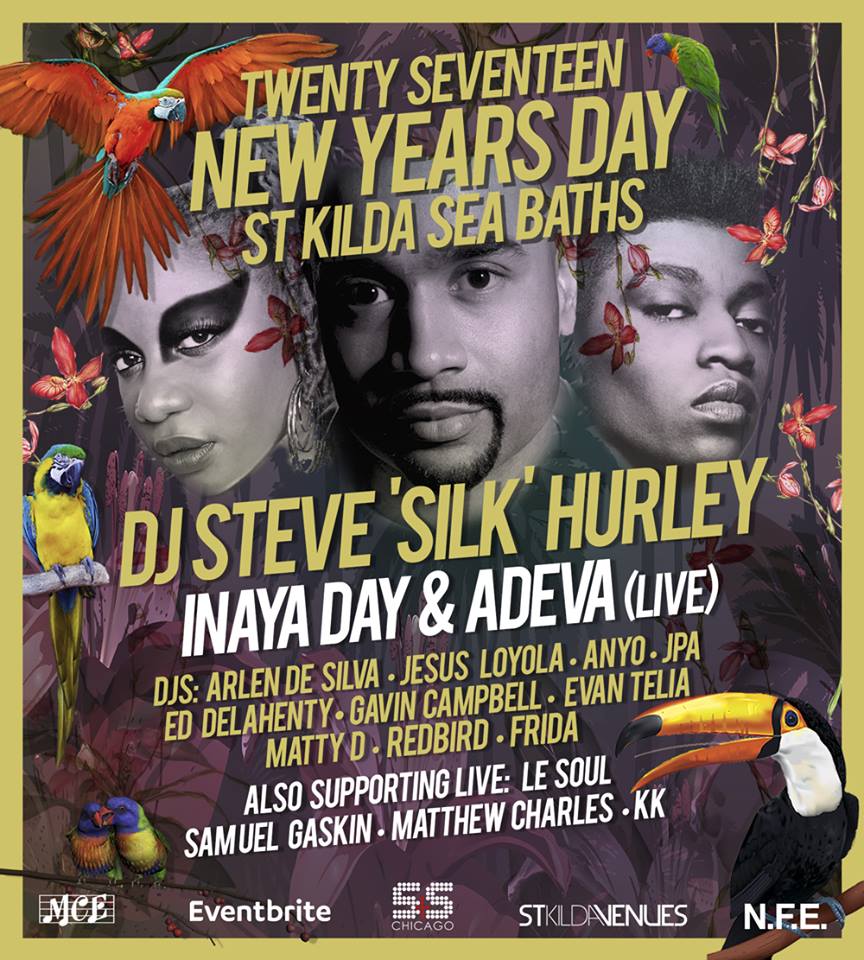 Celebrations, festivities and music will be spread out over three stunning venues; Encore, StKilda Sea Baths Rooftop & Captain Baxter all taking in the exquisite panoramic views of StKilda Beach and Port Phillip Bay.

We are proud to give you a line up un parraleld on NYD and by far our most impressive in over 6 years of the event.

STEVE ‘SILK’ HURLEY
Steve “Silk” Hurley is a producer, songwriter, DJ, and 4-Time GRAMMY® Nominated Remixer. He began his career as a DJ, artist, producer, and pioneer of Chicago’s “House Music”. After creating several No. 1 hits with RCA, London, and Atlantic Records as a recording artist, Silk shifted his focus to songwriting, producing and remixing. He has since worked with hundreds of various artists including Prince, Madonna, Janet Jackson, Michael Jackson, CeCe Peniston, R. Kelly, and Mary J. Blige. While maintaining a successful production career in which he has sold several million records, Silk has still remained true to his DJ roots.

INAYA DAY (LIVE)
INAYA has been in dance music for over 20 years! She’s had numerous UK, Aria, and Billboard top tens and is still going strong!

Is one of the gratest voices of you generation, Her second album, 1991’s Love or Lust featured two hit singles on the US Dance chart, “Independent Woman” US Dance #7 and “It Should Have Been Me” US Dance #1
Adeva collaborated with house-music pioneer Frankie Knuckles in 1995, with whom she released two UK Top 40 singles and an album, Welcome to the Real World

Along with two hours of complimentary canapés, vodka cocktails, sparkling and premium beer, all at the most picturesque venue on the water, this offering is all about quality – Get in quick before it’s too late!!

For over 12 years & counting Chris NG has been one of the leaders of the vibrant & ever-changing Melbourne House scene and is currently involved with the Goodlife, Afrocan & Le Soul projects. With a dedication to great music & the art of DJing Chris has gained a reputation for continually pushing new music, creating dance friendly environments & reaching out to a diverse music-loving community.