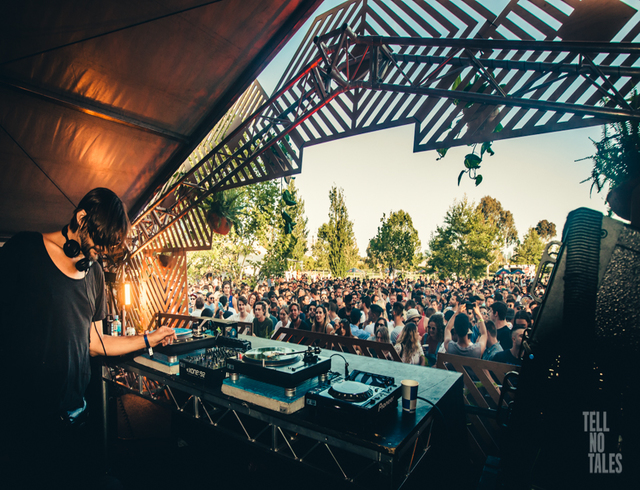 So, what’s with all the flies Melbourne?  I went to Tell no Tales on Saturday and it was amazing but those flies… I couldn’t believe how many. They didn’t stop any one from enjoying the festival but seriously there were too many…

Back home (Kosovo) I had a different problem. Cigarette smoke. People still smoke inside the bars and clubs and even though I quit 14 years ago, (I started when I was 9 until I was 23 years old) I was an active second hand smoker. Clubbing is what I love and what keeps me fit so even though I would inhale an enormous amount of smoke and stink after (hair, clothes, skin) I would still do it. I was so happy to come to a country where smoking is done in separate areas. It is pure heaven for me. And then Flies hahahahahaha.  Beautiful outdoor event with only one annoying problem. Maybe if flies were not there it would’ve been too perfect to handle 😛

You know, small things make me happy… like toilet paper in toilets. Being an experienced clubber I always carry with me small antibacterial wet wipes and dry tissues cause usually clubs or festivals run out of paper. This festival had paper to the end 😀 I went for a wee just before the festival finished…
Being new to Melbourne I didn’t calculate the time I needed to get to the racecourse right and I missed Nastia… That sucked. I bet she was awesome. I saw her live back in 2011 or 2012 I think, when she came to Kosovo. She made sure we remembered her ☺

I managed to catch a little of Agents of Time and did like them but again those flies.. I think it took me a bit of time to adjust. We were considering of booking these guys back home and I think we should have.

I went to check the 2nd stage that had local artists playing. Mitch Bain and Jive Wilson were on (I wouldn’t recognize them so I am assuming from the time table) I enjoyed them very much.

Decided to have some food before the “legendary” Ricardo came on and watched the crowed gather and move from the 2nd stage to the main. I was waiting to see if or when will he fuck up. Why I am saying this is because even though he is a very skilled and famous DJ, a trend setter, as of late it is a pure gamble with him. It could go any other way. In Kosovo people booed him. Some were too high to notice and they maybe had a good time but some seriously didn’t like the disrespect he was showing for his devoted fans. I always make the best of it and I tried to have fun until the end. He was messy…

I noticed after a little while the crowed was going to the 2nd stage again and it was full while the Journey and Hands Down were playing. Ricardo continued at the main stage and every time I thought I would give him another try something happened. First the music stopped completely where I thought he must be done. Then after a while I tried again and the music went very quiet while he was playing and it was like that for a while. Some people were shaking their heads at him. Not sure why he still gets booked ☹ There are so many great DJs instead.

So yes, the Locals rocked…

I was amazed with people how lovely, beautiful and happy they all were… Very friendly as well.
Some more creative than others with their expressive outfits 😀 I think Australian men are very handsome. I know they have a reputation as such but now I can vouch for them. Beautiful 😀

I saw some drag queens/performers. LOVE THEM. They are the only reason I wish I was a boy, so I could dress up as a drag queen. Oh and I wish I could wee like a boy, just more practical. Still, back in a day I did do some very out there costumes and outfits. What Drag Queens mean to me is that you can be and do and look and act any way you damn please. They are freeing in a way and visually so exciting ☺

I made some new friends while at the festival. I was surprised at how genuine these people are because I thought since we met at the festival they won’t remember most of it tomorrow but all of them wrote to me saying they are very happy to have met me and now we will keep in touch. How nice is that. Some people I had trouble understanding. Now I don’t know is it because I am foreign or because they had an accent or because they were too high… I kept smiling and they kept smiling and I think that is what is most important 😀

One guy at the Boris Brejcha gig came up to me and said that every time he sees me he thinks to himself that everything is going to be ok. No matter what is going on around him and he said a lot was going on, he felt calm and safe when he would see me dancing. That was so nice ☺

Back to Tell no Tales…

PAN POT is the shiznitttttttt….

Wow. I was blown away. I think I bursted in to trillions of pixels and got back together several times during their set. Goosebumps and all….

For me these guys were the highlight. Great energy. Awesome music. Flawless. The positive energy was bouncing through people like in a great pinball game.
It was my first time hearing them live. They are the real thing. Real showmen who understand their audience and love what they do. There was passion. There was maturity in their bass. Just amazing… Hope this set was recorded.

They are a tough act to follow. Metthew Dear or Audion was great too but I think Pan Pot took everything out of me.
Before I left, me and my friends checked out the 2nd stage one more time. And great again. Pete Laskis & Mickey Nox. Nice send-off and we were gone….
I tried hard to stay awake and listen to Pan Pot one more time at the after party at Sorry Grandmas but due to my therapy with antibiotics I just gave up around 1 and went home. Was told it was amazing again ☺

You who were not there and wanted to be and you that were, see you next time ☺ Come say hi if you see me ☺
J.A.F.F, Kiss Member & Event Reviewer

Tap here to follow Tell No Tales on FB