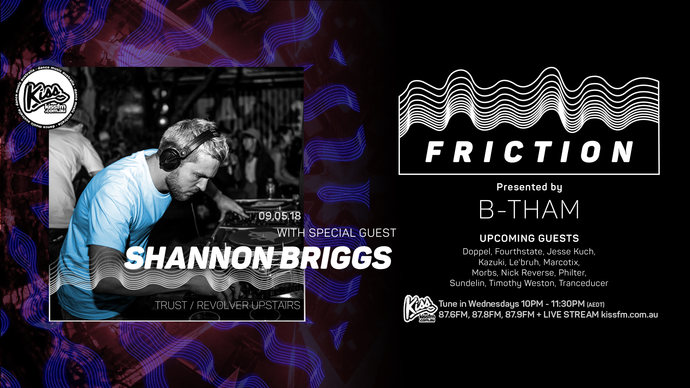 Friction welcomes into the studio Shannon Briggs. Recently returning from the US, Shannon has some fresh tracks he is ready to show Australia. Plus Shannon is coming into the studio so we are having a little chat with him, to see whats happening in the world of Briggs.

Shannon Briggs has established himself as one of Melbourne’s leading taste makers. Having worked as booker at Australia’s Revolver Upstairs as well as sister venue Boney alongside Henry Who, his accomplishments outweigh his short time in the scene. Having started by establishing Trust Events & Touring with fellow DJ Viktor, the two are well known party starters, throwing infamous Trust events around Melbourne including a bi-monthly residency in Revolver Upstair’s front bar, known infamously as ‘Trust In Revolver.’

As a DJ Shannon’s sound is a revisionist and narcotic blend of house, techno and disco. Known for it’s unpredictability and crate digging mentality, it has seen him hold down coveted residencies as well as support an impressive rap sheet of international guests. These include Toro y Moi, Delta Funktionen, Peggy Gou, Michael Mayer, Matthias, !!! (Chk Chk Chk), Terry Francis, Jacques Renault, Kolsch, Zhu, Mr C, Mister Saturday Night and a memorable back to back set with The Revenge and Post Percy at his weekly rave Loomer (to name a few).

As well as playing at resident clubs Boney and Revolver, Shannon has played internationally at clubs Glow, Bangkok, Octava, Bogotá (Colombia) and Kerfuffle, Cambodia. Local festival sets include Babylon Festival and Earthcore alongside well received appearances at Melbourne’s Monday day party The Breakfast Club, plus appearances at virtually every underground club in Melbourne.

Are you ready for Shannon to show you how it’s done? Tune in on Wed at 10pm and check out the latest episode below while your waiting!