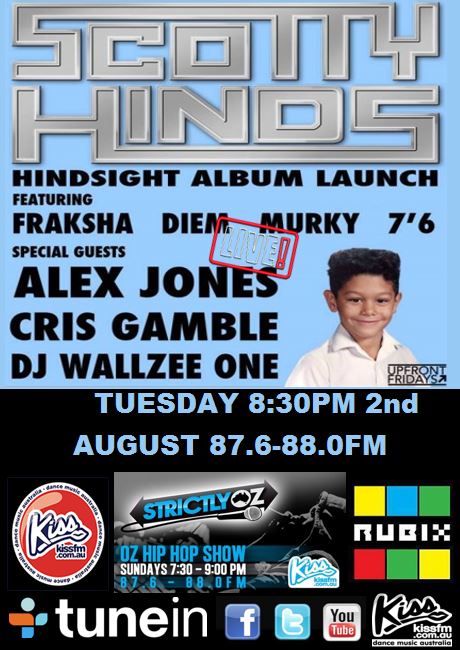 Join Cook & Big Dip this Tuesday as they have Scotty Hinds and crew from Smash Bros/Nine High Broken Tooth Entertainment Live up in the studios for some Live HipHop on the radio!! 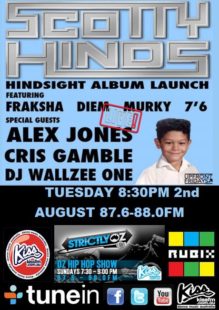 Hindsight is the first official solo album from Scotty Hinds an artist who is multi faceted, well versed & prolific in his craft.

Known for his impressive radio appearances & grime shows all across Australia, he is one third of the UK rap crew Nine High (Byron, Fraksha & Scotty Hinds) & one quarter of the Melbourne Grime dons, Smash Brothers (Diem, Fraksha, Murky & Scotty Hinds).

Since releasing the Nine High album followed by 2 solo mixtapes, Scotty joined the BTE family & teamed up with Youthful Implants to release the EDM infused Carnival Music EP in 2014, Scotty has been steadily working on writing the material for Hindsight & he has blessed this project with work kept at his highest level of skill & quality.

Joining Scotty on stage are fellow Smash Brothers members Fraksha, Diem and Murky with 7’6 on the decks. Alex Jones (LGEEZ) has been going from strength to strength solidifying his place in the local hip hop and grime scene gaining recognition in the UK with his heavy flows and punch lines. Expect a killer set from one of Melbourne’s finest.

Producer/emcee Cris Gamble has been etching away in the underground scene for quite some time, honing his skills combining the best of traditional hip hop with a today’s fresh sounds. DJ Wallzee One returns to hold it down on the decks between live acts with a fine selection of new and old school hip hop.