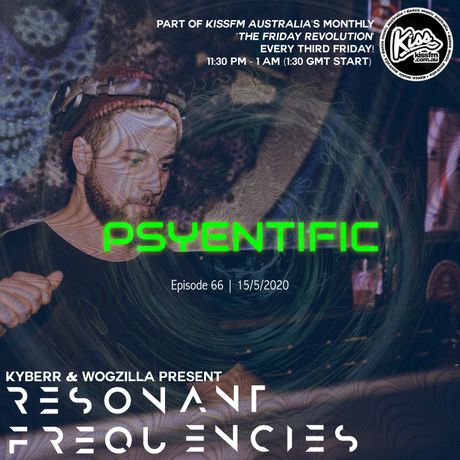 For Friday’s broadcast, we invited Ilya Davidov AKA Psyentific to the show. Listen in as we chat to Ilya about his past gigs, achievements & tunes! The show airs on the 15th of May on ‘The Friday Revolution’ on KissFM Australia starting at 11:30 PM (1:30 GMT start)!

studying health science, incorporating the two into his profession, and being the driving forces behind his DJ project Psyentific.

Ilya has grown up around a diverse mixture of genres including multicultural music, learning

2012-2014. It was only in 2014 at a small party in Victoria, Nomtreya where Ilya discovered Psy Trance. He made an instant connection to the structure of the music and the human body, which created much curiosity for the effects this music could have.

His debut at Lunars Eclipse 4.0 made a mark on Melbourne and is becoming a familiar face to Melbourne’s nightclub scene, playing for crews such as Progression Sessions and Contact High. Lots happening for this new guy, but the best is yet to come through. This September 13, Psyentific will play his first gig in WA for State Forest’s annual outdoor festival – Fireworld as well as Victoria’s up and coming outdoor festival Division this October 2019!

Ritmo, Burn In Noise, Earthling, Nano Records and Iboga Records to name a few, his passion for creating sets and producing music became stronger, bringing him to this point of releasing Psyentific; with a goal to curate sets that are progressive and driving with layers and melodies in a way which alters the body to move deeper into its expression.

Keep your ears peeled for other upcoming gigs, online sets and all that’s to come!

Search ‘Psyentific’ on your favourite social media to find out more!