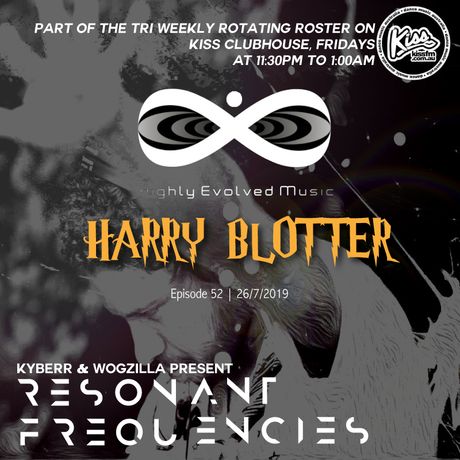 For our 52nd show, we bring to you a huge installment of psychedelic audio here on Resonant Frequencies – Kiss FM Australia. Joining us will be no other than the label head at Highly Evolved Music and DJ, Jason Ruklis AKA Harry Blotter!

So tune in to the broadcast from Friday night (26th of July) at 11:30 PM (AEST) to hear what we have in store for the Kiss FM listeners!

Harry Blotter has been a familiar face throughout Melbourne’s electronic music scene since the turn of the century. Still, an avid vinyl collector, music in all its forms has always been an important part of life.

A much-loved Dj and skilled producer in his own right. Harry is also the head of Highly Evolved Music. Now up to their 35th release, the label’s focus is to help raise the profile of some of our most talented  Psytrance & Techno producers & get their music onto the worlds biggest stages.

A product of the Vinyl era, Harry’s musical tastes were heavily influenced by Melbourne’s Techno scene in the early 2000s. Inspired by the sounds he was hearing week in week out he first started collecting records in 2002. Within a year he had established himself as a talented & versatile artist with a unique & intuitive style.

Refreshed by his down to earth attitude and astonishing skills many promoters reached out, seeing Harry becoming a key artist with many of Melbourne’s most prolific underground crews like Pharmacy, Unstable, Tekno Mulisha, Drumatix, Smile Police, G.O.D, Contact High & 3D.

The last 15 years have seen Harry support 100’s of international acts in some of Melbourne’s most memorable locations.

The last 5 years have seen Harry working on a variety of styles while refining his own production skills. In 2017 Harry released his first Ep titled “Just a Phaze”. During 2018 he released 3 single tracks on various compilations.

Stay tuned for more upcoming releases &  the debut of both his Techno & Drum and Bass Livesets towards the end of this year.