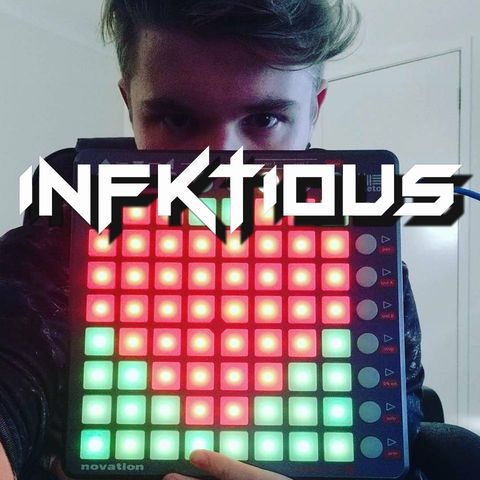 In an ever-growing scene such as the Riddim Dubstep Community, it can be hard to stand out. With many talented DJ’s, creative and quirky producers and outright standard setters it can be hard for one to stand out from the crowd as a memorable character in the community.  Jack Bundy Bazeley “INFKTIOUS” however, doesn’t struggle with such matters. Hailing from the Central Coast NSW with a background in Hardstyle production and recently moving to Melbourne the 19 year old basshead has been making moves in the Riddim Dubstep scene as a DJ who utilizes four track chopping which is set apart from more better known household track chopping names such as SQUNTO by his unique sense of rhythm and influence from a space and lazer aesthetic of musical choice and internet culture, mostly popular and quirky meme’s that have had their share of being the trending meme on Facebook feeds of many; from this unique blend of creativity his musical project INFKTIOUS has gained much attention, reeling in over 900 likes on Facebook in under 12 months and more recently being recruted into the newly formed heavy Bass Music group “Filth Friends” and being added to their roster of DJ’s as well as starting a Facebook group page “Melbourne Bass Heads”  which aims to bring all bass music enthusiasts in the Melbourne and abroad together to talk, promote and share their interest and passion for the community.

Jack also demonstrates his quirky aesthetic through the clothing he wears, usually donning abstract clothing like a sweatshirt that has Opera Winfrey’s face as the design or a pair of “unique” glasses that were on sale at a service station. In such a stoic music scene however Jack is a refreshing breath of air in the scene, instead of rejecting the strange and esoteric he welcomes it with open arms and buckles himself in for what it has to offer.

Needless to say, at such a young age, Jack “INFKTIOUS” Bazeley is a personality and talent that shouldn’t be forgotten, with his skill and production in both his musical performance and iconic video editing format, the sky is the limit for INFKTIOUS.