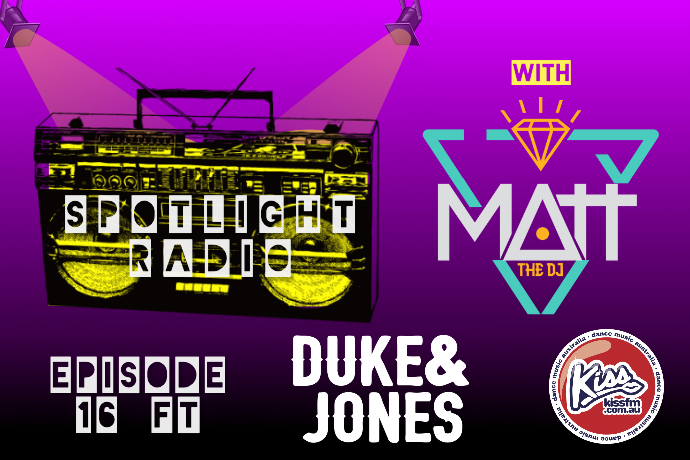 This week sees the UK based duo Duke & Jones stop by for an interview and huge guest mix jam packed full of originals and wall slapping goodness.

Duke & Jones are ushering in a new wave of electronic forward-thinkers, & they’re positioned to push a blend of hip-hop, trap, & house into exciting new directions. Among the UK’s brightest new exports, the 24-year-old Manchester duo are creating a deep catalog of primal, earthy productions, all wrapped in a spine-tingling minimalist aesthetic – the duo’s signature sound can best be described as “less is more.” They emerged on the scene quickly, & it didn’t take long to catch the attention of electronic music’s biggest power players, like Marshmello, DJ Snake, & Diplo.

The pair’s meteoric rise found their fearless sonics landing on some of today’s most elite labels, including Interscope, Deadbeats, & Circus Records. Duke & Jones’ come up wasn’t quiet — they caught the ears of dance music’s top dogs and leading labels, and almost instantly had the entire industry abuzz from Billboard to talent buyers, all eager for what the pair have up next. Starting out strictly in the studio, building a brimming index of bold dance pieces, the gifted wunderkinds have too much material now to keep behind the console. Just a short trip from home, the young DJs live debut comes full circle to London’s legendary Ministry of Sound in September 2018. Duke & Jones are bringing their exploratory, textured sound to the masses, but they won’t be satisfied with just chart domination or club circuit acclaim — their aspirations aim much higher. Duke & Jones are dead set on blazing new trails and blurring old boundaries, and they’re off to a staggering start already.

Check out the full interview with me and the guys below.

Q. Alright guys first things first, where and how did you meet?

A. Jones: we’ve actually technically known each-other since before we were born, because our parents are friends. We were at primary school together, although we weren’t close friends at that point – Luke was way too cool for me as an 8 year-old.

Duke: I got dragged to his house by my parents for New Years Eve and after a pretty awkward first hour we got chatting about what we were into. We discovered we both were making awful hip hop beats, so that night we sat down and produced an abomination but I guess that was technically our first collab.

Q. What’s it like working in a duo, do one of you do more producing and the other does more of the live stuff?

A. Duke: It’s relatively split but Isaac definitely has a better ear when it comes to mix and master.

Jones: Luke’s being modest – he especially produces more of our heavier stuff, and kept the production show on the road while I was at university. It’s more even now I’ve graduated though.

Q. Who is the better driver and why?

A. Jones: seeing as I’m the only one who can actually drive, it’s a default W for me. With that being said, I’m terrible at directions, and just three days ago I nearly turned down the wrong side of a dual carriageway until Luke said “you can’t go down there!”, so I’ll take the win but with the caveat that Luke would probably be the better driver if he could drive.

Q. Did either of you have much success as a soloist prior to Duke & Jones?

A. Jones: Luke had some success as a soloist when he won a contest with a song we made together but took my name off it… and when he sampled one of my songs and made it into a rap beat and didn’t credit it… not that I’m at all bitter about any of it.

Duke: I built up a pretty good rep as a hip hop producer in high school but yes… most of them were sampled from Isaac.

A. Jones: based on the above, I’m probably the salt…

A. Jones: if it’s a cheese toastie you want, then Luke’s your man. He’ll often do lunches, but if we’re making an actual proper meal I’m usually taking the lead. The cleaning’s an even split I’d say.

A. Duke: I think it was around 2016 when I quit my job and decided it was now or never to buckle down. I found having a normal Monday to Friday, 10 – 6pm routine really helped with my creative process. Even when I really didn’t wanna produce I’d force myself to sit there and more times than not I’d end up making something good. So yeah I’d say having a structure / routine down in place to keep you focused is very important.

Jones: It also helps to have a manager breathing down your neck!

Q. Open up your UberEats, go back four orders, what did you order?

A. Jones: I’ve never used UberEats but on Deliveroo it was a KFC Mighty Bucket for One with reg fries and an orange tango. I think I was hungover.

Duke: Whilst writing this I’m having a McDonalds Uber Eats Delivery so…

Q. If you had to pick one track out of your catalogue, released or unreleased to keep and discard the rest, what would it be and why.

A. Jones: I would pick Fall Right In with Sydnee Carter. I love how it’s melodic and moody but also quite hard. That or Burner.

Duke: I think I’d say Isolate. I’ve been obsessed with the chords ever since we made it and I love how it’s got a retro feel to it whilst also being modern sounding. This Could Be is up there for me too.

Q. Imagine you’re in the crowd watching yourselves play, you both hold a phone up to yourselves, what do the phones say?

Q. What’s on the horizon when restrictions get lifted for you guys, tour? New releases?

A. Jones: there’ll be new releases whatever the weather. A tour will happen at some point, but it’s all pretty up in the air at the moment with the wildly different scenarios across different countries.

Q. What’s going to be in your guest-mix?

A. Duke: We’re going to be showcasing a lot of different styles. Playing some tracks from our new EP and also sharing some unreleased stuff! We’ve also added a UK Bass House section to stay true to our roots.