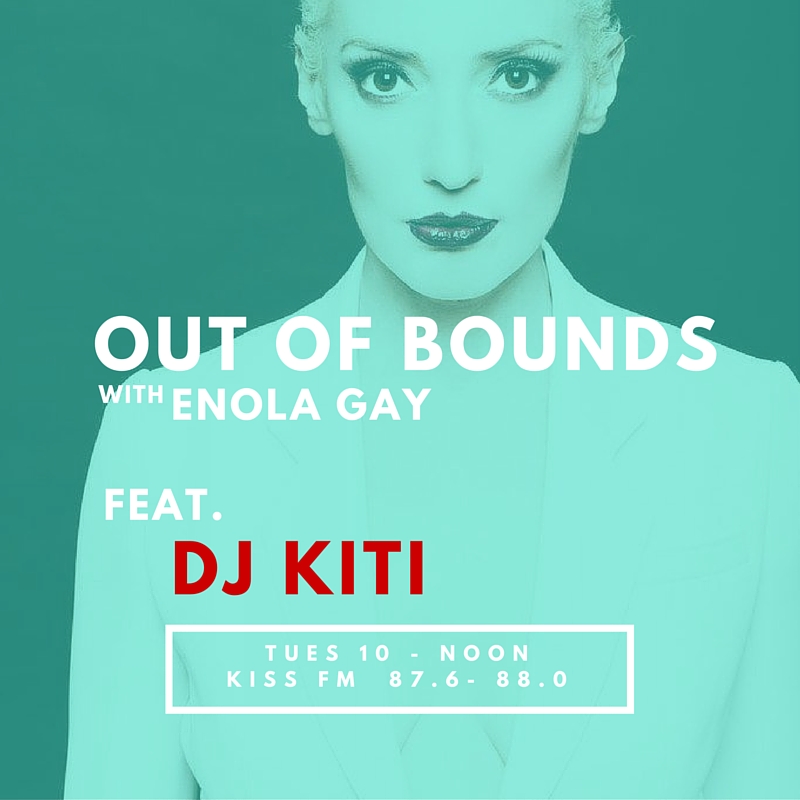 This week we have techno goddess, D-Floor legend, Melbourne music scene icon: DJ Kiti; Coming in for a special Guest Mix. So make sure you up bright and early this Tuesday morning so you don’t miss out. The Kiss Fm studios might just be temporally turned into a rave cave.

In the grand tradition of great entertainers of history, there stands one Melbourne DJ, who, with her artfully crafted performances, has managed to capture the spirit of what it is to not only play music, but to connect with an audience to truly and utterly entertain. This icon of the Melbourne music scene has been curating the sounds of countless early morning music connoisseurs with as much chutzpah and character than even the most prolific players. She is as endearing and as magnetic as they come, but unlike those who try so hard to be admired, she, as if born with the blood of leadership in her veins, receives it unconditionally. As Dj Kiti,Tamara Kiti has become both pioneer and favourite, individual and drawcard, a sound and a style – the ever relevant and always exciting first lady of Melbourne, who gives the party to her audience without compromise, or fear. Dj Kiti’s love of music started with a purchase of a 7 inch at the age of 4 and has continued throughout her life. For over 12 years she has been both DJ and entrepreneur, as co-owner of LIGHTSPEED RECORDINGS which has been responsible for a number of top charting releases, and has spurned her foray into production, edits and remixing. Her passion for the nightlife experience has also seen her become a prominent figure in the operation of seminal club nights ROXY (7 years) and LOUD (Honkytonks, 4 years) as well as playing alongside techno/houses’ finest DJ’s and bands at festivals and institutions all over Melbourne. Her impressive list of achievements cross over into fashion, with her followers and supporters having placed Kiti on the throne of the fashionista. As a woman of style and sound, Kiti has provided her audiences with an experience that incorporates an unmistakably striking visual style to support her versatile sound. So it is no surprise that, as a self proclaimed fashion obsessive, Kiti was invited to musically curate fashion shows for L’Oreal Fashion weeks (2011 & 2012) as well as for various labels and events in the independent fashion realm.

The LGBT crowd has also embraced her as one of their own with residencies at various LGBT club nights such as JOHN, POOF DOOF, CRASS and the Melbourne powerhouse, Trough X, where she was honoured as the first woman to enter & Dj on the premises. Her unique musical presence has been a must see event at the countless residencies she has held, from Survivor!, OneSixOne, Danceteria, Revolver Upstairs, to techno staple parties Machine, Pleasure Planet & Bunker, HANDLE BAR (Syd), and the The House of Mince (Syd) who were responsible for the legendary MINCE MEAT warehouse parties. In recent times Kiti has graced the international decks, having played the main room at watergate club “official” Berlin (2013) along side DJ Hell, and in England at Londons East. Kiti has recently supported Rrose, THE HACKER & A Guy Called Gerald to name a few. Yet even when we place her insurmountable accomplishments aside, what we are left with is a woman of incomparable musical expression, immeasurable drive, and limitless passion – an act in a class of her own, held as the pinnacle of sound, substance and style by all who have ever had the pleasure of experiencing her craft.