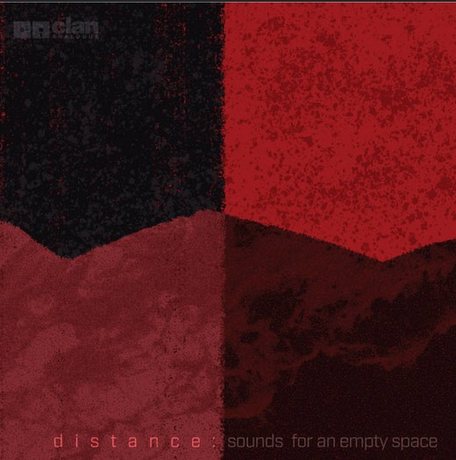 Clan Analogue presents Distance: Sounds for an Empty Space
CA054
The expanse, the microcosm, consciousness, time…
Drones can represent those aspects of existence that seem too large or abstract to fully
comprehend. Drone music gives a sense of both stasis and evolution. It provides a space for
contemplation, enables a moment of oneness with the universe.
Over the last year Clan Analogue’s artists have looked within to find renewed sonic purpose.
The result is Distance: Sounds for an Empty Space: ten drone compositions blending noise and
meditation in equal measure.
Each artist provides their own unique sounds for an empty space. Sectoral’s epic modular synth
perambulation is an inner journey through imagined empty streets in our cities. iubar project
explores empathy through harsh ambience; Jennifer Lea’s contribution is a sonic blanket in a
field. Nicole Skeltys creates a soundscape to accompany a monologue for a dying financial
system. Michael Mildren builds on the epic synth drones of early 70s German electronic
pioneers.
The sounds explored on Distance range from field recordings, to analogue synthesizers, ipad
digitisation to modded antique computer soundcards.
City Frequencies sample and rework the noises cluttering cities in frequency ranges beyond our
hearing. Zogam experiments with time-stretched guitar drones while WiLL-i-ROMS rewires the
soundcards from early 80s arcade games to improvise layers of digital noise. Kazumichi Grime
allows unconstrained pure oscillator tones and white noise hisses to build up into a wall of
distortion and conflicting harmonics.
All the Clan Analogue artists contributing to Distance were encouraged to work free of any
constraints of time or format. The result is the legendary Australian electronic music
collective’s most abstract and expansive music yet.
Distance: Sounds for an Empty Space will be launched with the live-streamed event Drones for
an Empty Space, an improvised five-hours of live drones and abstract electronic noise
from nine artists on the album, taking place as part of the Melbourne Digital Fringe in
the evening of Saturday, 28th of November.
Distance will be available on all major music streaming platforms. A limited edition cassette
release is coming soon from Bandcamp.