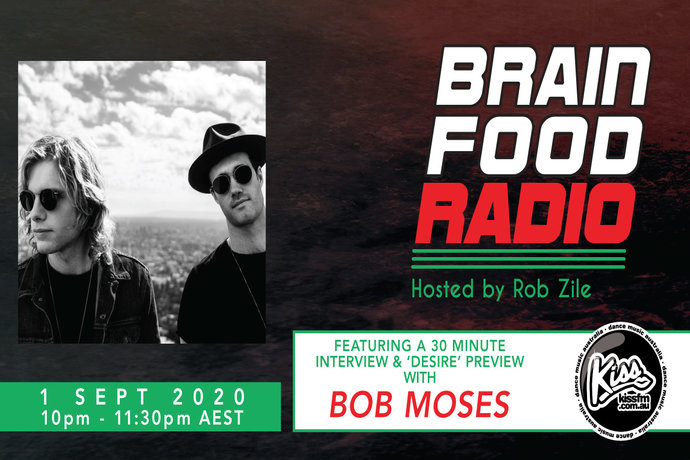 For their next release, Bob Moses—the electronic duo of Tom Howie and Jimmy Vallance—wrote a concept record for the club. Presented over six continuously mixed tracks, Desire is a love tale for the digital age: all about the positives and pitfalls of humanity’s driving wants, especially in these technology-driven times.

After making 2018’s Battle Lines, which focused on a tighter, more traditional song structure and touring that around the world in their full band format, the duo set off on a European club tour as their original two piece setup.  “It was great being back in that environment and feeling the communal energy,” Vallance says.  Feeling inspired, studio time was booked while still on tour. “We wanted to make something that was continuously mixed, something that would take the listener on a journey and replicate that feeling we try to create when we’re playing our sets in a club,” says Howie.

As the ideas coalesced, they realized there was a thematic through line: desire, and the ways it presents itself in our current world. “Desire can become quite destructive if you’re not self-aware. With this record, we’re trying to be self-aware by looking at our own desires and reckoning with them,” says Vallance. “Stories about desire are timeless: Icarus flying too close to the sun and ending up falling to his death….that idea inspired the falling man on the album cover. That symbolized to us how desire can lead to a downfall.”

Howie adds, “We’ve appreciated the worlds created in concept records from bands like Pink Floyd and Nine Inch Nails. We thought it would be interesting to combine that kind of songwriting with the flow of modern electronic music.”

“Love We Found” opens Desire with a sense of longing and wanting, as Howie sings, “after all this love we found, will you be around?” “The Blame” takes the energy up a notch, realizing the pain from actions taken in the heat of desire. The album reaches its peak energy on the title track, a hypnotic late-night collaboration with Grammy-nominated electronic musician ZHU. The video for “Desire” uses anaglyph imagery to display two different sides of desire. With the press of a button, viewers can switch between worlds of Pleasure and Pain, manipulating a beating heart into a burning fire, lipstick into a bullet, joy into despair. It’s a deft and delicate dive into the ups and downs of desire. “Hold Me Up” serves as a light at the end of a tunnel and a testament to hope, while “Outlier” is about the modern-day obsession with projection of an outward image. There’s a lust involved in scrolling through social media—everybody’s life looks more desirable from the outside. “Ordinary Day” rounds out the project on a bittersweet note.

“We know with social media everyone is projecting an image, only showing you what they want you to see, and that creates a longing, a type of desire, and also creates a tension.  A lot of people end up hiding the internal suffering that’s going on,” shares Vallance.

Vallance and Howie started Bob Moses in 2012 and signed to Domino two years later. Their 2015 debut album, Days Gone By, featured the track “Tearing Me Up”, which was nominated for two Grammys with the RAC remix taking home the trophy for “Best Remix Recording (Non-Classical)”. The duo, a perennial festival favorite, has repeatedly been minted by Resident Advisor as Best Live Act (2014, 2015). 2018’s Battle Lines spawned the hit single “Back Down”, which led to a performance on Ellen; the record was named one of Billboard’s “Best Electronic Albums of 2018”. Following Battle Lines, Bob Moses released Battle Lines [Remixed], featuring remixes from the likes of Hayden James, Jamie Jones and Cassian, as well as Unplugged, an acoustic EP of songs from Battle Lines and other repertoire favorites.

In early 2020, Bob Moses relocated full time to Los Angeles. “We were planning on doing a lot of touring with our club set this year and we were creating music that we would feel excited about playing in that environment,” says Howie. Now, with the world in quarantine, Bob Moses has been staying connected with fans through a weekly livestreamed DJ set on YouTube, dubbed the “Bobcast”.

Check out Bob Moses’ music below then listen to Brain Food Radio on Tuesday night for their interview and mini album preview!