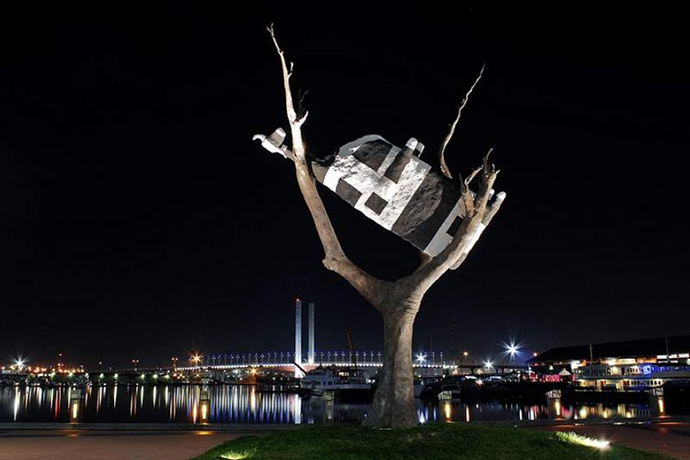 The interview starts at approximately 57 mins.

This Monday on FORUM, I’m super-excited to be interviewing the artist extraordinaire, John Kelly.

John Kelly has been described variously as an awkward bugger (Fergal Gaynor, 2007) and a free radical (Guangzhou Triennale, 2008), and while these observations are no doubt true, his awkward and radical behaviour leads to some interesting results.

John was born in 1965. His father, from Cork, and mother from Bristol, the family immigrated to Australia the same year. Due to his birth, heritage and circumstance, John now holds three passports and as a result, is an Englishman, an Australian and an Irishman. John has lived in all three countries and for the past decade has resided in West Cork, Ireland.

In 1985 John obtained a Bachelor of Arts (Visual Arts Painting) from RMIT University, Melbourne, where he also completed his Master of Arts in 1995. As a winner of the 1995 Anne & Gordon Samstag International Visual Arts Scholarship, he travelled to London to study as an Affiliate Student at the Slade School of Art from 1996 to 1997. In the UK he exhibited regularly with the prestigious Piccadilly Galleries in Cork Street, London and then Agnews Gallery, and has continued to do so with Merville Galleries.

John is a painter, sculptor, and printmaker, crossing many creative mediums, including writing, in which he has written numerous articles for Art Monthly (Australia & UK), Circa-ish magazine (Ireland), ‘The Art and Writings of John Kelly, an Awkward Bugger;’  and The Guardian newspaper (UK).

In Australia, John is best known for his paintings and large sculptures of William Dobell’s cows – paper-mâché creations used during WWII to confuse enemy aircraft to the location of the Australian airbases. His sculptures of these cows have been exhibited on the Champs Elysées, Paris, in Les Champs de la Sculpture, 1999, Monte Carlo, in La Parade des Animaux, 2002, the MAMAC in France, The Hague, 2007, Glastonbury (2006 and 2007), Cork city 2011, Melbourne Docklands (2001 to the present), and in Melbourne’s City of Brimbank (2016 to present).

More recently, John’s work has taken various turns and adventures that have seen him tackle contemporary issues – such as branding in modern culture and museum politics – in places such as the 2008 Guangzhou Triennale, and 2009 Göteborg Biennale.

Commissioned in 2005 by David Walsh – Museum of Old and New Art (MONA) in Hobart, John created artwork for the Moo Brew beer labels by referencing the logo of the Australia Council for the Arts, who themselves had advocated a “Branding the Arts” strategy. The commission outcome was a successful anti-branding branding campaign, and since then, the award-winning labels have become iconic Australian beer labels.

In 2013 John was awarded a fellowship as an artist in residence at Antarctica with the Australian Antarctic Division, where he spent two months in extreme conditions painting 57 artworks, later exhibited at the Tasmanian Museum and Art Gallery in Hobart – in association with MONA’s Dark Mofo, and at the West Cork Arts Centre in Uillinn, Ireland. https://dailyreview.com.au/john-kellys-en-plein-air-in-antarctica/26254/

The 57 paintings later formed a book called ‘Beyond Woop Woop: John Kelly in Antartica,’ – the name Woop Woop referencing the colloquial name for the Antarctic airbase at Australia’s Casey Station.

Fast forward to 2018, and John’s 2000 cow painting called, After Picasso (Jug and Saucer), that was exhibited in 2000 at Niagara Galleries in Melbourne, has recently been acquired by the Yale Centre of British Art, in New Haven, Connecticut.

John’s work is held in numerous museums and galleries in Australia, and in China at the Guangdong Museum, with his most recent exhibitions in Sydney (Look and Put) and London (British Art Fair).