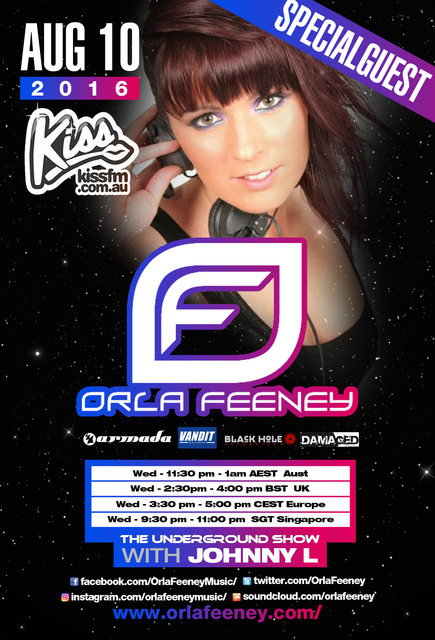 “She is definately one of the people we have supported for years. She has a major talent in making music, she is the presenter of a great radio show and she DJs very well and I totally believe she has the possibility of rising to the top, big time.” – Paul van Dyk

“Orla has the potential to be the first female to really crack the Trance world. She has that extra little bit of charisma that ignites dance floors” – Col Hamilton (Lush!)

“Orla has an infectious dedication for the dance scene. She has energy behind the decks and a real hunger to learn in the studio. I am sure she will keep on this path until she is topping bills for years to come.”  – John O’Callaghan

Named by Beatport as an Inspiring Female Artist.

Orla is without doubt one of the most energetic and passionate DJs in todays modern trance scene. An artist and performer who can create a mesmerizing journey of emotion for the dance floor with consummate ease. There are not many DJs who can command the floor like Orla but she does so with a seamless mixture of powerful baselines and uplifting synths and melodies that complement her unparalleled stage presence.

Orla has come through the ranks at pace in recent years and deservedly so.
Her reputation precedes her wherever she goes and there is always a demand for her return.
Her talent and charisma has lead Orla to play at recent festival events such as “Tomorrowland”, “Airbeat One” and “Trance Nation” while she has graced the stages at massive club events and venues such as “Lush”, “Tripod”, “Digital Society” and “The Arches”. If you add these to various other appearances in USA, Ibiza, Czech Republic, Vietnam, Argentina and more it is clear to see that the demand for Orla is worldwide.

In terms of productions Orla is able to back up her unquestionable DJ talent with a back catalogue of massively successful anthems. Ever since her debut release “Comic Strip” was picked up by Paul van Dyk’s “VANDIT” imprint she has had a great relationship with the label that seen nine other releases including the most recent, “Bittersweet”. As well as VANDIT, Orla has also seen releases and remixes feature on labels including “Armada”,”Subculture”, “Future Focus”, “Goodgreef”, “Black Hole”, “Full Tilt” and “Spellbinding” all of which have aided and added to her growing reputation as an accomplished, successful producer.
It is this respect for her skills that has lead to many collaboration requests from producers and vocalists.
Collaborations with “Full Tilt” “Lisa Lashes” and “Tom Colontonio” have seen successful release.
Solo productions in 2013 are backed up by collaborations with “Eddie Bitar”, “Walsh & McAuley”, “Antonia Lucas” and “Deirdre McLaughlin”.

The hat-trick of feathers in Orla’s cap comes in the form of radio. A successful radio show host on national FM radio back home in Ireland, Orla has transferred this experience to her own “TASTER” podcast which is available on i-Tunes every week. She also hosts “TASTER” on leading online radio stations including “Afterhours.fm” and “1Mix Radio” and gathers more and more subscribers and listeners every week growing her world wide fan base.

Some artists are DJs, some are producers, with Orla you get both, THE COMPLETE PACKAGE.