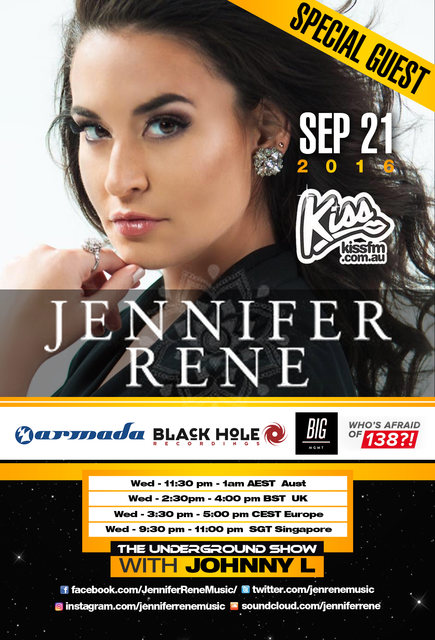 Jennifer Rene was born with music in her heart and soul in her voice.  Writing songs and performing at the age of 10, she was destined to become a part of the music world.  Ion discovering her first EDM event at 21, she knew the dance world was her calling.  In 2006 she wrote her first dance song “Louder” with Jose Amnesia which was immediately picked up by the worlds #1 DJ Armin van Buuren and signed to his record label Armind.

Jennifer immediately became a household name in the Armada family.  Long with other tracks like “Wouldn’t Change A Thing”, “Invincible”, “Fall to {Pieces” ad her famous collaboration with Armin van Buuren “Fine Without You”, she’s made a name for herself on the dance charts and in the trance community.  She’s traveled the world as a part of the Armin Only “Imagine” tour in 2008 and has taken her voice and DJ passion, performing from Los Angeles to Sydney, Australia and everywhere in between.

Jennifer has also collaborated with the top producer and DJ Markus Schulz for the smash hit “Not The Same” and producer and DJ Tydi for the song “Greater Height. At the end of 2013 Jennifer teamed up with Rafael Frost for the vocal hit “Higher” which raced up the Beatport Trance chart and was supported by Armin van Buuren and Markus Schulz on their weekly radio shows “A State of Trance” and “Global DJ Broadcast.”

In 2015 Jennifer teamed up with hitmaker John O’Callaghan and released “Games” where the Standerwick Remix rose to #2 on the Beatport Trance chart, was played continuously on ASOT, and featured on Armin’s ASOT Ibiza compilation.  Jennifer also released tracks with Roger Shad & Sied van Riel, Protoculture, Hazem Beltagui, Solid Stone and Somna in 2014, which could be heard on dance floors nationwide and claimed there place in the music charts.

Recently she released “Smile” with DRYM.   And many more track to come!

yielded so far Jennifer Rene contributions for the following CDs: