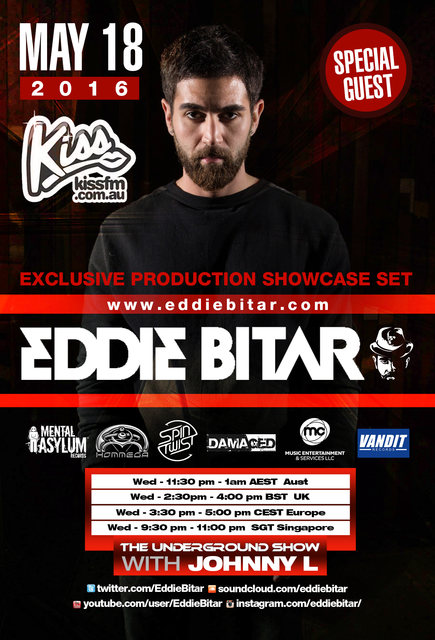 In little over a year, Eddie Bitar has propelled himself in amongst some of the world’s most established DJs and producers in the scene today. Born in Canada with Lebanese roots, Eddie’s sound of forward-thinking cutting edge Trance has seen him received huge support from the likes of Armin Van Buuren, Paul Van Dyk, Max Graham, John O’callaghan and Aly and Fila. With releases on the globes largest Trance labels Armada Music and Vandit Records, it’s no wonder Eddie is being highlighted as one of the most promising up and coming artists in the industry.

Eddie’s first breakthrough came in January 2011, when he received his first major signing on Armada Music with the track ‘Drift’ – a collaboration with Anjunabeats favourite Genix. With a chunky progressive base line and a mysterious sounding overlay, the production firmly set the groundwork for even better things to come.

Following up his initial success, Paul Van Dyk’s Vandit label immediately stood up and took notice, snapping up a 2 track E.P. titled ‘Beirut’ and ‘Red Room’. Beirut, an ode to the town he grown up in, perfectly translates the constant energy flow of Lebanon’s largest city and capital in an energetic sounding production. With a remix coming from Trance heavy weight Giuseppe Ottaviani, support was received from Alex M.O.R.P.H, Sean Tyas and John O’callaghan as well as being chosen for Vandit’s “Best of 2011” compliation alongside work from Sneijder and Maarten De Jong. The B side ‘Red Room’ combines big room Trance sounds with an uplifting melody rolling in to a hard hitting base line. Support followed from XYZ…

With no sign of slowing down, Eddie’s ability to create fresh high quality music led to the opportunity to show case his remix ability. Given the accolade to remix Paul Van Dyk featuring Arty – ‘The Ocean’, he wasted no time in taking up the challenge. Whilst retaining the sun drenched vocals, the tempo was turned up to give harder hitting sound, “Putting Paul back where he belongs” (Armin Van Buuren on A State of Trance radio episode 567”).  It was no surprise that further support came from Max Graham, Mark Sherry, Jordan Suckley and Indecent noise, as well as reaching the dizzy heights of #17 in the Beatport charts and staying within the top 100 for over 3 consecutive weeks.

It’s not just as a producer that Eddie has excelled with his talents. As a DJ, he has been no stranger performing out to a crowd. DJing in 2008 across Lebanon, he soon earned himself a position as resident DJ and Promoter at Chocolate Club (Lebanon) in 2010. His name has appeared with many international artists & vocalists including Jennifer Rene, Betsie Larkin, Marco V, Jerome Isma-ae, Greg Downey, Daniel Wanrooy, Max Graham, Mark Sherry, Genix, Marten De Jong, Fred Baker and Greg Nash.

Relocating to the UK, one of the most established Trance nights in the country ‘Passion’ was the next stop. The night featured Eddie Bitar alongside Eddie Halliwell , Judge Jules, Lange , Giuseppe Ottaviani , Jon O’Bir , Bryan Kearney , Genix , Lee Haslam and many others. Passion has been host to some of the biggest names in trance music, including luminaries Armin Van Buuren, Paul Van Dyk, Markus Schulz, and Tiesto. Eddie made a strong impression with his first appearance and was invited back to the follow up event on November 5th, continuing to hold his own against the established acts.

Summer 2012 has continued to snowball for Eddie. His 2 hour monthly radio show on AH.FM has included guest mixes from up and coming artists such as James Dymond and tech-duo Bowdidge & Taylor as well as Trance favourite Giuseppe Ottaviani. DJ gigs has seen him grace the decks in Ibiza, a return to Lebanon and forthcoming booking alongside John O’Callaghan in the main room at the world famous Ministry of Sound for the ‘Gallery’. More releases have been scheduled for autumn 2012 with Armada, Vandit and some very special collaborations that have yet to be announced.

With things going from strength-to-strength, it won’t be long before Eddie Bitar’s name and sound is recoganised by music fans all over the globe.

Born in Canada, with Lebanese roots, Eddie has the music running in his soul. His passion and devotion to compose and produce music made his life-long dream of becoming one of the finest Trance dj/producer come true. Beginning his music career in 2008, Eddie started by performing in some of the best Clubs, beaches, and venues across town. By 2010 He earned himself the position of Resident DJ and Promoter at Chocolate Club (Lebanon). His name has appeared with many international artists & vocalists including Jennifer Rene , Betsie Larkin , Marco V, Jerome Isma-ae, Greg Downey, Daniel Wanrooy, Max Graham, Mark Sherry, Genix, Marten De Jong, Fred Baker, Greg Nash..

In April 2011, Eddie was invited to Passion’s 16th Birthday at The Emporium Club in the UK celebrating another year of hard partying, the most breathtaking events, and the best Dj’s alongside new and upcoming artists. The night featured Eddie Bitar alongside Eddie Halliwell ,Judge Jules , Lange , Giuseppe Ottaviani , Jon O’Bir , Bryan Kearney , Genix , Lee Haslam and many others. Passion has been host to some of the biggest names in trance music, including luminaries Armin Van Buuren, Paul Van Dyk, Markus Schulz, and Tiesto. Eddie made a strong impression with his first appearance in the UK. It was easy to see the instant magnetic attraction the crowd had to his impressive beats and controlling sound. Eddie’s ability to touch the crowd is far beyond his humble personality; it is in his musical talent and his strong belief in the music itself.

In January 2011, Eddie struck gold and signed his First track “Drift” with Armin Van Buuren’s Record label, Armada Music.
Drift is a collaboration track with the UK based DJ/Producer Genix, and has been released in August 2011.
Eddie is now working with a label that signs and manages some of the biggest names in dance music. This included Markus Schulz, Stonebridge, Andy Moor, Josh Gabriel, Dash Berlin, DJ Remy and M.I.K.E., Roger Shah, Mischa Daniels, Simon & Shaker and of course Armin himself. The Amsterdam-based label is also a two-time winner of the Best Global Dance Label Award at the IDMA show in 2009 and 2010.

“Over the years, Berlin based label VANDIT Records has shown to have a keen ear for upcoming talents.
Today’s promises make up for a bright future, as we indulge in the new talent of Eddie Bitar.
Tomorrow’s prospect’s looking shiny, as Canadian but Lebanese born DJ and producer Eddie Bitar kicks in with an ode to his ‘Beirut’.

Perfectly translating the constant energy flow of Lebanon’s largest city and capital, ‘Beirut’ unleashes a sound heat-wave.
Pumping beats and fine, tension-building effects swirl in perfect harmony. In the break, Eddie attached a massive lead-line,
followed by an even bigger pay-off, making it impossible to stop moving.
The flipside won’t get you out of your groove either. ‘Red Room’ is driven by a cold hard and deep bass, but built around a core of warm, heartfelt melody.
A tight mix of pure trance pleasure, about to rock the global floors.”

Also, pushing this young artist by giving him the opportunity to introduce himself and his tracks on Paul Van Dyk’s radio show, VONYC Sessions (Episode 252).