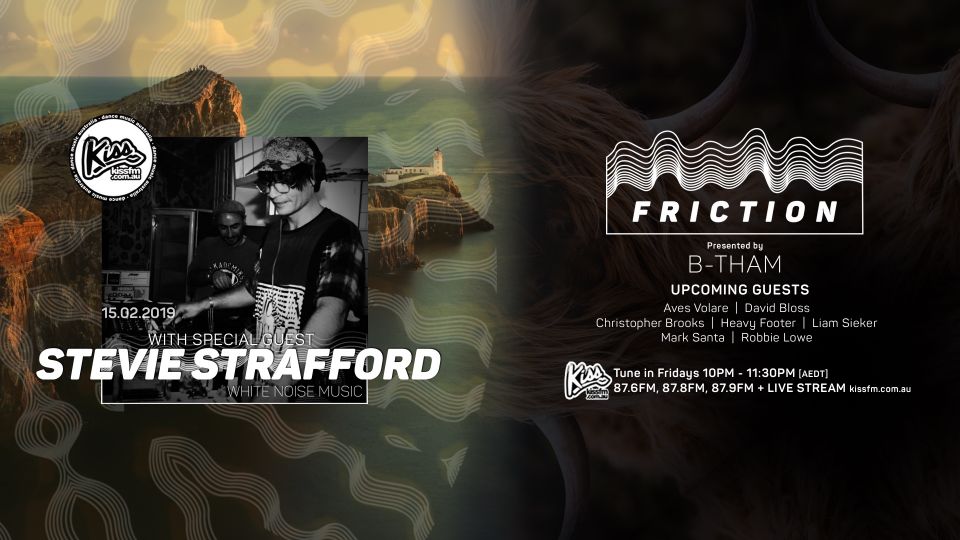 FRICTION welcomes Melbourne DJ STEVIE STRAFFORD. Stevie is a stable for good sounds and is a resident DJ with White Noise Music. We here at Kiss are keen to see what he brings to the airwaves.

Some DJ’s simply defy the rules of genre-classification and this artist is no exception – if blissful electronica with a touch of magic was actually a genre then you’d be getting close….

Scottish-born DJ and musician, Stevie has musical DNA. His true self can be found in his live sets and studio recordings: they’re deep, full of soul, fun and 100% heart. He’s been involved in bands, writing music, playing guitar and performing all over the UK since an early age, and after moving to Australia has focused more on electronic artistry and DJing.

His performance style and set creation is unique. Stevie has been playing for established crew including In2deep and FabriKation, and has appeared on several international line-ups including D-Nox, Sam Paganini, D.A.V.E. The Drummer.. Secret Cinema, and many many more , he’s pleased crowds at events the likes of Earthcore , FRL , The town festival , RSF and many others. He supports and is proud to be part of the White-noise brand headed by Luke Lawrence. You can hear him on Kiss Fm with his show with Jason Holden for Non-Descript music . .