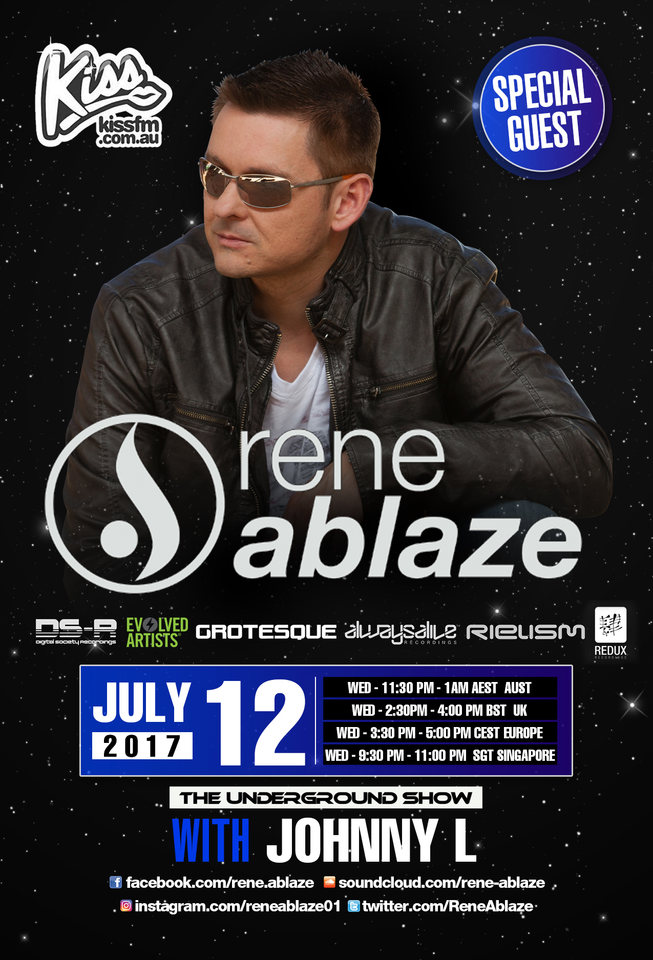 Born in the small city of Enschede in the Netherlands, Rene Ablaze has steadily risen through the ranks of trance music over the past two decades to become one of its most exciting talents.

The man otherwise known as Rene Bos released his first record back in 1996 and set up his own imprint Redux Recordings in 2005, which counts over 200 releases to its name. As well as his consistent slew of anthems on his own label, he’s also released on some of the scene’s biggest labels, including the legendary Spinnin Records, Infrasonic and Nukleuz. Support for his work has come from the biggest names in trance, from Armin van Buuren to Markus Schulz, with his fiery productions finding their way onto compilations by Ministry Of Sound, Armada and Sony to name a few. His remixes for the likes of Tiësto, Airwave, Yves Deruyter, Airwave, Wellenrausch, Gary D, Jones & Stepherson, Setrise and Walsh & McAuley have been bit met with huge acclaim

His sound is drenched in complex melodies, with a tough edge that never veers too far yet provides a solid, punchy groove for his riffs to build upon. Mixing progressive house and trance, his occasional forays into the mainstream have seen him champion soaring vocals and infectious hooks. He scored his biggest chart hit in 2008 with Stealin Love, which reached No. 21 in the Dutch Top 40 and No. 2 in the Slam FM Top 40 with the help of Fallen Skies. In 2012, his single Curiosity hit No. 1 in Germany’s Radio Sunshine Live Top 20, further cementing his reputation as a producer of infectious crossover tracks.

His Monthly 2-hour radio show United Energy continues to go from strength to strength, broadcasting the latest trance and progressive anthems to an ever-increasing audience via a selection of stations across the world, while his DJing has taken him to Germany, Spain, Russia and the Ukraine, to legendary events such as Love Parade, Ruhr In Love, Nature One. Two decades in the game and showing no signs of slowing down, Rene Ablaze is as dedicated to his craft as ever.

Between 2012-16 Rene Ablaze has sought to become a whirlwind on the uplifting and tech trance scene from his base on the german/dutch border and to his credit he really has taken the fight to the scene in recent times. One of the old school and long standing members of an elite that are indeed still standing and continuing to evolve, Rene took control of his own destiny by setting up his very own record label and musical platform called Redux Recordings and across the last few years he has been hard at work establishing that frontier as one of his vital life lines that he is indeed able to release his own music through as well as other hot new producer/DJ’s. It stands to reason then that his main focal point across the last few years has indeed been on firmly establishing his own label globally and as a direct result, Rene has secured no less than twenty three record releases in that time all on his own of course, which has allowed him to continually push the musical envelop. within the trance genre.

Alongside Rene’s escapades during 2015/16 this master tactician decided to reach beyond that which he knew to work his magic on a musical collaboration with The Enlightenment called ‘’How I Became Me’’ for the record label – GO On Air Records which belongs to the Italian maestro Guiseppe Ottaviani. This was received enormously well amongst both international fans and peers themselves, that Rene once again got the bit between his teeth and he wanted to begin challenging himself musically and so he once again reached out to bigger and bolder labels to showcase his newly emerging sound.
The next major single which was released through How Trance Works Records was Rene’s carefully crafted vocal collab with Amy Kirkpatrick entitled ‘’Falling In Your Arms’’ which picked up international support from right across the trance spectrum and begun to show the trance community at large that here was a man on a mission to conquer and this man would be utterly unrelenting in his quest to become a major player. However the releases didn’t stop there, because to follow was the three way collab between himself Ian Buff and vocalist/songwriter – Diana Leah on the simply sensational record ‘’Ill Find My Way’’ which managed rave reviews globally This release was proceeded by a slew of additional releases on his very own Redux Recordings in order to bolster his release schedule.

After a short period of reflection Rene and with one eye clearly on the future he swiftly decided that he would pursue a more vigorous goal of becoming a bit more exclusive as an artist in terms of how and where he would choose to develop his steadily emerging sound and so the decision was taken in 2016 that his future records would be solely represented by Sied Van Riel’s very own dutch Rielism Records and the UK’s Enhanced Records on Daniel Kandi’s imprint ‘’Always Alive’’.
As a result of team Ablaze’s decision to focus on two key label supporters Rene begun to take off after releasing the likes of ‘’Departure’’ with his collaborative partner F.G.Noise and his solo effort ’’Above The Sky’’. However they were all carefully woven into a very tight but well rehearsed record release schedule as Rene also managed to produce three killer single releases for Always Alive Records in the form of ‘’Pure Energy’’ which was a major collab with TrancEye which was then trumped by his incredible follow up with Ian Buff (Redux) called ‘’Stonecold’’ after which Rene went solo again with the absolutely dance floor rocking ‘’Indigo’’. Not one to be sat on his laurels Rene also presided over the simply stunning vocal collab ‘’Don’t Turn Away’’ with Diana Leah which charted incredibly well throughout many European markets on many a global dance charts as well as amassing over 100k Spotify streams. Which tee’s up nicely Rene’s next Rielism Records release for 2017.