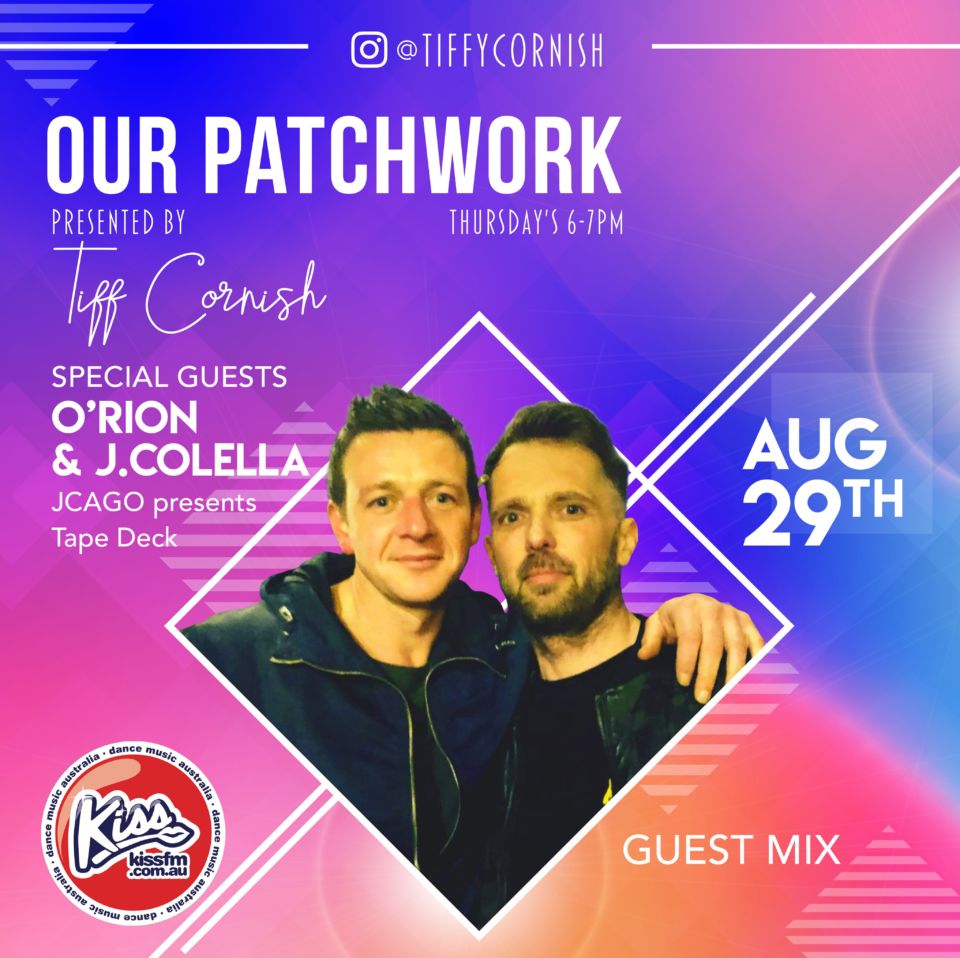 This week on Our Patchwork Tiff is joined by not one, but two of Melbourne’s finest DJs and party planners – O’Rion & J.Colealla!

“Working alongside some of Hard House Royalty in the late 90’s O’Rion Aka Greg O’Rion has earned his place in the industry. With his eclectic mixing style of House and Progressive House with a unique yet satisfying sound.

Starting in late 90’s in Cape Town Greg came up the ranks in Djing and has always had the taste for a Big Room sound with big bass lines and massive drops. “ Trance and Hard House were my favourite genres growing up.” Cape Town has a massive PsyTrance scene which was a great eye opener for the fat bass lines and trippy synths.”

Greg set his sights on London and started to gain recognition around the local bar and club scene. Working alongside some old London greats and getting to get some experience with the great talent that came out of London. Greg resided at many venues across London. Greg became the go to act for the groups events and parties. From live sets on national radio to securing residency at some of London’s nightclubs,

Greg headed east to Oz to work with Melbourne promoters.

Greg’s career continued Australia working with Scarlett and Tang entertainment working alongside the likes of Andy Murphy and many other up and coming artists of 2010.

Greg went on to study Audio engineering working with many musicians and entertainment icons. Greg studied audio at JMC and worked with many artists in audio and soon realised that I had to make it happen one way or another. “

“I felt I needed more in my career as a DJ though. I put my career on hold to focus on producing and really pay attention to what I can truly offer my fans.”

His contacts have brought him into the large event circle rubbing shoulders with the likes of Carl Cox and many local DJ’s. The sort of leverage needed to ensure success.

In between his busy schedule as a promoter, DJ and dad He has managed to find his place in this crazy industry.

Greg and his business partner James Colella created “Tape Deck. They run a monthly House and NU Disco event in the Western suburbs of Melbourne. ”

“Music and event management is my game.

I started DJ’ing at private parties from the age of 17.

I did everything from Birthdays and Weddings to local sporting club functions. I then went on to play at various local Pubs and then progressing to resident DJ at various clubs in Melbourne and Prahan. Viper Room on Chapel St, Cato Club in Prahran, Love Machine and Chase lounge to name a few. Was during this time I had gained a following.

From here I took the opportunity to look for my own venues and run my own nights.”