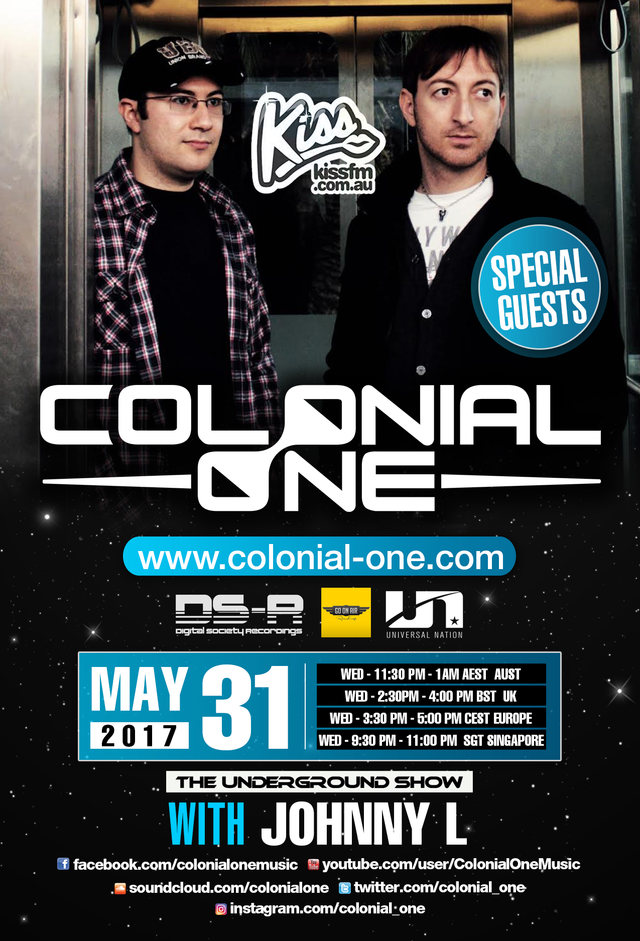 COLONIAL ONE   As  Always Hosted By JOHNNY L

The Colonial One adventure began in 2009, when Luca and Andrea started their unique trance project.
This creative alias captures the brothers’ passion for electronic music – as they begin to impact and influence the trance culture that they love so much.

Before Colonial One, they both worked in the music industry – with Luca involved in a variety of electronic genres while Andrea was a house and trance DJ at the local radio station.

The 10 year age gap between the brothers has been a very positive influence on their creativity – allowing them to bring diverse flavours into their own unique fusion.

And while that fusion is constantly being updated, it continues to convey uplifting emotions and progressive vibes, from brilliant vocals merging with the decks and pouring out through the speakers and into the audience, in a huge crescendo.

In 2010, the Colonial One vibe manifested itself in the critically acclaimed first single, ‘Elements’. This phenomenal track has already been taken in new and interesting directions by the world’s leading DJs like Armin Van Buuren and Above & Beyond.

Colonial One’s rhythm didn’t stop pulsating there. With the launch of their second single ‘Always on my mind’ (supported by Armin Van Buuren) and their ‘Taking off again’ remix (supported by Above & Beyond) – Colonial One was suddenly made available to a much bigger audience.

The unstoppable brothers gained the support for most of their remixes. Dash Berlin gave them high exposure with ‘Nylon’ remix, which has been included in United Destination compilation (Armada Music). Fans loved the Colonial One remix of Ultimate’s “Wonderland”, supported on Trance Around the World with Above & Beyond. The track has been used by the brothers for a magnificent mashup of the classic track of DT8 Project ‘Destination’, released on Mondo Records with the approval of the original artist Darren Tate.

In 2012, the italian duo had their apparance in the Italian edition of DJ Mag with their Top 10 Chart. Few months later the Indian magazine Euphoric gave more space to Colonial One project with another Top 10 Chart and review.
Following their London debut, Colonial One shared their remix if Speed Limits ‘Bris’ with of the Enhanced Music followers sharing their remix for Speed Limits ‘Bris’.

A long experience in radio shows: Colonial One are now mixing their favourite tracks every month on Afterhours.fm, trance.fm and other radio stations for syndication. Italian trance music fans can now also listen to Colonial One on m2o.it (main EDM FM radio station) with a podcast called ‘Trance Evolution Exclusive’.

Amazing as it is, this is just the start of the adventure for Colonial One – and you can be part of this journey by following the brothers on Facebook, Twitter and Soundcloud.