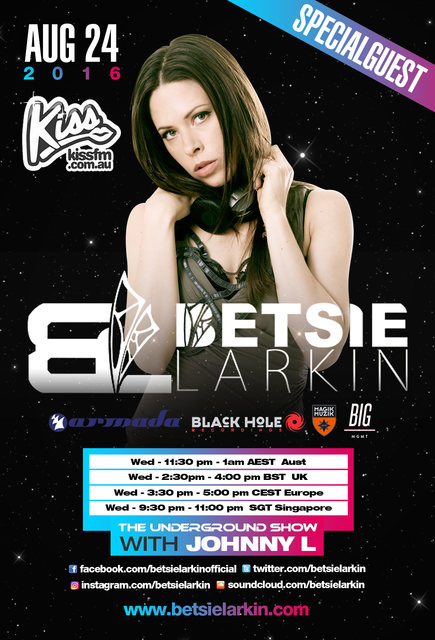 Join Us This Week On The UNDERGROUND SHOW With Special Guest

Best known for her signature uplifting vocals and lyrics in dance music, Betsie Larkin has given fans a stunning collection of original music through her career as a solo artist and in her collaborations with some the world’s top DJs/Producers – Armin van Buuren (Safe Inside You and Again), Paul van Dyk (Love Is), Ferry Corsten (Made of Love, Not Coming Down, Stars, Feel You), ATB (A New Day), Gabriel & Dresden (Play It Back), Andy Moor (Love Again & Not Afraid), and others.

More recently, Larkin has applied her musical talent to production and DJing. Her hour-long mix show, Larke Radio airs on Digitally Imported radio, Music Choice, iTunes, and Soundcloud. She debuted her live mixing skills in a headlining DJ set at Pure Lounge – the top dance club in the South Bay of San Francisco. She has since circled the globe making stops at top clubs and music festivals in the Americas, Europe and Asia.

Betsie credits Dutch Producer/DJ Ferry Corsten for her entrée into dance music – their first release, “Made of Love,” skyrocketed to the top of dance charts worldwide reaching the Top 40 pop charts in Europe. Prior to working with Corsten and others, she honed her craft as a songwriter in a rock band in college, as well as by writing with top songwriters in New York and Los Angeles. A demo of her original music landed in Corsten’s hands through his manager, Alan Stewart. They have since penned a total of five songs together, including the theme for Nintendo’s blockbuster video game, Bayonetta 2.

Larkin is currently working on her first album length DJ album, which is slated to be a three part series on Black Hole Recordings.