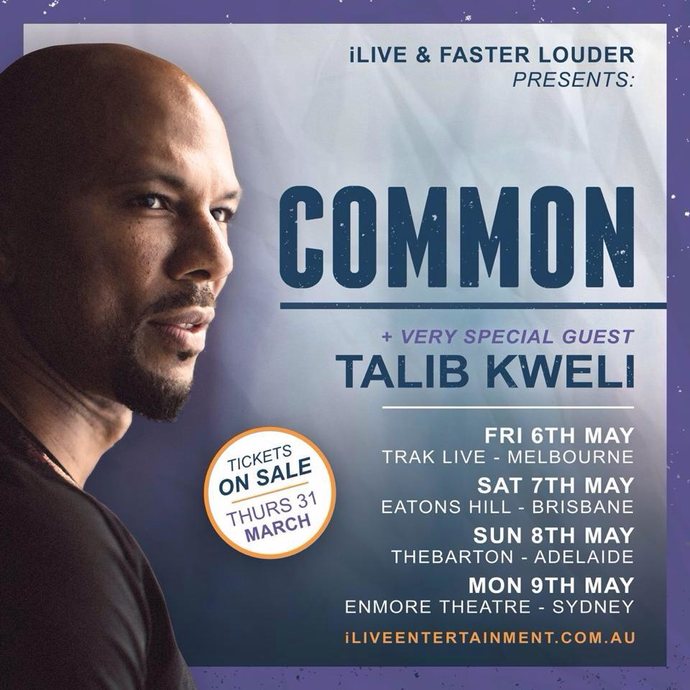 Become a Kiss member NOW [$55] and get a Single Pass General Admin [valued at $101] to see Common + Talib Kweli: MELBOURNE this friday at TRAK!!!

If you need to know how KISS stays alive thanks to its Members, and why we NEED you and REWARD you click here.

WHAT YOU NEED TO DO

We only have a limited amount of TIX – First in First Served.

Here’s some more Info about the Artists & Event

After blowing away Australian audiences in 2014 on the Soulfest bill, Common is returning to Australia for his first ever headline show. The popular Rapper and Actor who has won 4 Grammy’s, recently added to his success by winning a Golden Globe and an Academy Award for his work on the lead track ‘Glory’ from the movie in which he starred, ‘Selma’. Based on the 1965 Selma to Montgomery voting rights marches led by Dr. Martin Luther King, the film touched the world and garnered Golden Globe and Academy Award nominations. Known for his energetic live shows, Common is starting his tour in Melbourne on Friday May 6th, and is stopping in Brisbane, Adelaide, Sydney and Wellington, NZ.

Joining Common is special guest Talib Kweli The Brooklyn-based rapper earned his stripes as one of the most lyrically gifted, socially aware and politically insightful rappers to emerge in the last 20 years. The human rights activist can regularly be seen on American TV and in the media discussing current issues affecting the lives of the community, including mass incarceration, economic equality and police brutality. A regular visitor to our shores, Talib is known for putting on an incredible live show.