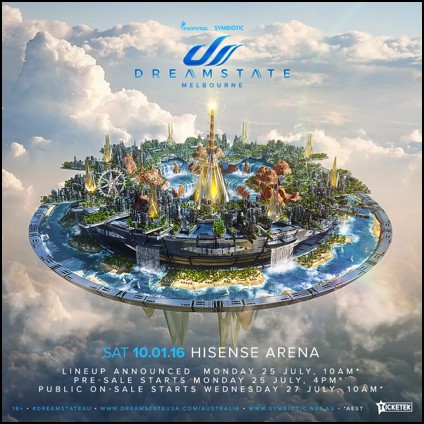 Symbiotic Partners with Insomniac to Bring ‘Dreamstate’ to Australia

Pre-Sale Registration for ‘Dreamstate’ Australia is now open at:
http://symbiotic.net.au

In Brief:
‘Symbiotic’ and ‘Insomniac’ are thrilled to announce that Melbourne, Australia has been chosen as the home of the newest edition of ‘Dreamstate,’ Insomniac’s dedicated trance brand, hosting sold-out shows and curated festival stages across the U.S.  Taking place at Hisense Arena, Melbourne on Saturday 1st October, fans can expect the show to be a state of the art experience.  The Dreamstate Australia lineup will include a global debut performance from an incredible artist, as well as some of the world’s most respected trance acts.

“In less than one year, our dedicated trance event, ‘Dreamstate’, has gained huge support from fans all over North America,” said Pasquale Rotella, Founder and CEO of Insomniac. “Along with new gatherings in Southern California, San Francisco, New York, and Mexico, we are excited to announce the show’s latest destination: Australia. We can’t wait to take the energy of ‘Dreamstate’ to passionate trance fans across the globe.”

The ‘Dreamstate’ lineup will be announced on Monday 25th of July.  Pre-sale ticket registration is now open at symbiotic.net.au.  Fans are encouraged to sign up to ensure they have first access at securing their spot at ‘Dreamstate’ Australia, before tickets go on sale to the general public at 10am, Wednesday 27th of July from Ticketek Australia.

Since ‘Dreamstate’s’ inception, the brand has produced an incredible event in San Francisco at ‘Bill Graham Civic Auditorium’ and hosted stages at the 2016 festivals ‘Beyond Wonderland’ SoCal and Electric Daisy Carnival’ (EDC) in New York. In June, ‘Dreamstate’ sold out TAO at the ‘Venetian’ in Las Vegas and took over the Sunday ‘circuitGROUNDS’ stage at the momentous 20th anniversary celebration of ‘EDC’ in Las Vegas. This August, ‘Dreamstate’ will host its first stand-alone event outside of California, hitting New York City, and will also return to the ‘NOS Events Centre’ in San Bernardino, California on November 25-26, 2016 with an expanded three-stage experience.

‘Insomniac’ produces some of the most innovative, immersive music festivals and events in the world.  Enhanced by state-of-the-art lighting, pyrotechnics and sound design, large-scale art installations, theatrical performers and next-generation special effects, these events captivate the senses and inspire a unique level of fan interaction. The quality of the experience is the company’s top priority.

‘Symbiotic’ is Australia’s newest trance company lead by Janette Bishara and Richie McNeill.  It’s focus will be on delivering cutting-edge designed, original shows and well as delivering fans some of the world’s biggest event brands.  The touring division will compliment the event department, with some of the world’s most loved acts expected to tour Australia in the next 12 months.  With a wealth of experience between Janette and Richie, the Australian trance community is going to be invigorated by Symbiotic’s upcoming announcements.