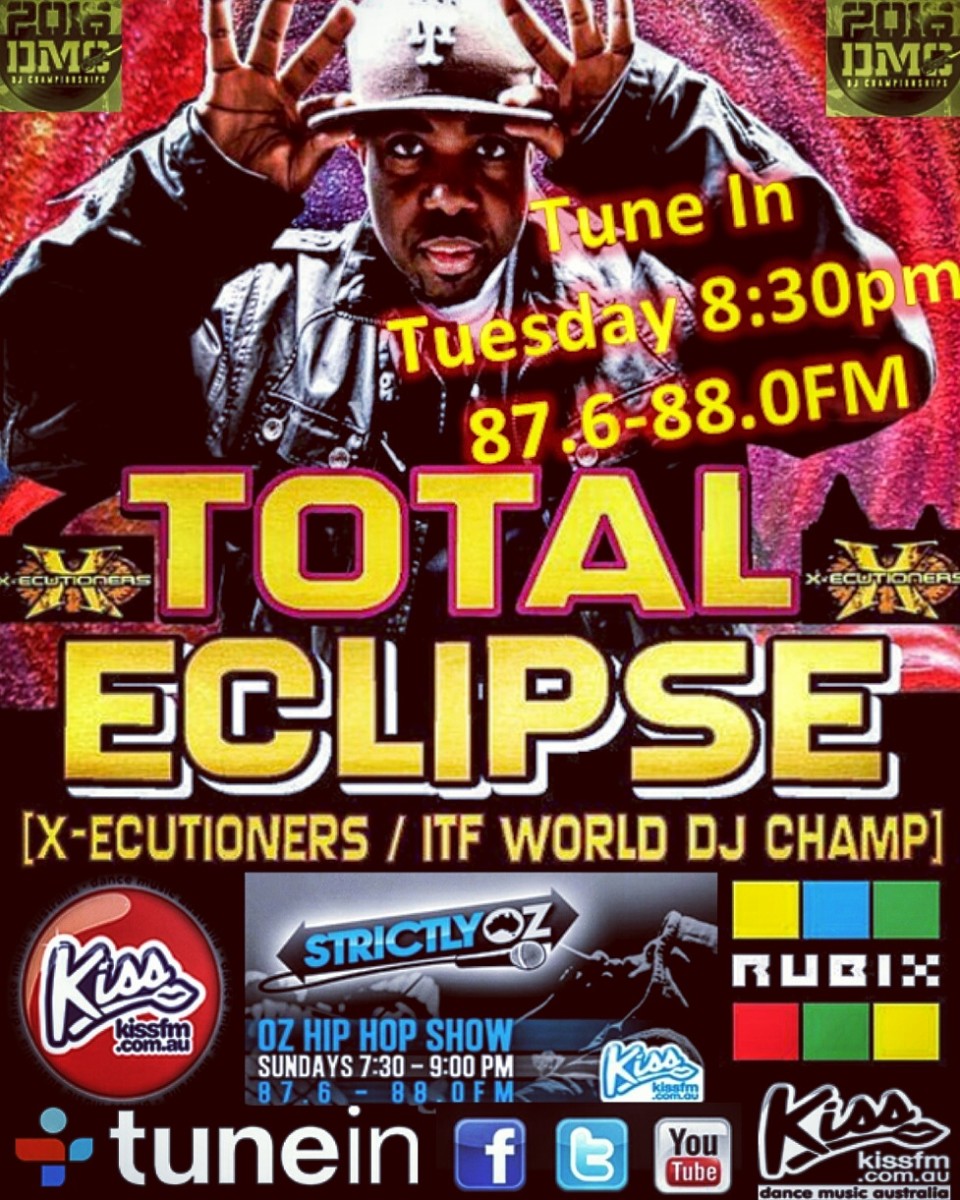 The DMC Championships are here and one of this Years Judges and All round turntable master ” DJ Total Eclipse” if performing and we caught up with him to chat about whats happening with this years DMC Championships. 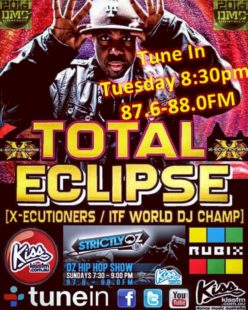 X-Ecutioners / Ill Insanity/ ITF World Champ)
Total Eclipse of the world famous X-Ecutioners DJ collective from New York i…s a man of many talents, as comfortable throwing down a mind blowing routine in his guise as one of the world’s best turntablists as he is rocking a crowd of thousands in party mode…
Even at the early age of 14 it was apparent that Total Eclipse was destined to become one of Hip-Hop’s greatest DJ’s. Influenced by DJs like Steve Dee (founding member of the original X-Men), and EPMD’s DJ Scratch on Video Music Box watching classic EPMD videos, he saved enough money to buy a pair of turntables and a mixer and the rest, as they say, is history. At first he began to emulate his heroes on the wheels of steel but quickly moved forward, developing a style all his own and gaining respect from anyone who saw him spin. Coming out of a close-knit Brooklyn community, his skills on the turntables earned him the reputation as the go-to DJ for all the community’s needs. He manned the turntables for such groups as underground Hip-Hop legends Organized Konfusion (Prince Poetry and Pharoahe Monch) and even worked with fellow Brooklyn native Jay-Z during the birth of ROCAFELLA RECORDS, before both their careers reached commercial success. In November of ’94, Total Eclipse entered his first DJ battle live on the air on DJ Mayhem’s college radio show on WNYU in New York City, taking first place. His victory caught the attention of X-Men (the original name of the crew before obvious legal concerns) member Rob Swift. Rob Swift started to spar and practice new routines with Total Eclipse on the turntables, showing him traditional DJ methods like beat-juggling – something Total Eclipse is now known for. Through Rob, he became acquainted with the other members of the X-Men, including Roc Raida and Mista Sinista, and started practicing with them regularly.

In 1996 it was Total Eclipse’s mission to make the world feel his presence on the ones and twos. He entered legendary record shop Beat Street Records’ DJ Battle, and took home the first place bronzed Technics 1200 turntable prize. Dominating the DJ battle scene that year, he went up against the best in the world, going after one of the most prestigious titles in the DJ world, the International Turntablist Federation (ITF) world championship battle. As a heavy favorite going into this competition he didn’t disappoint, and etched his name in DJ history as an ITF World Champion DJ. Through this outstanding achievement Eclipse’s career defining moment came: X-Men leaders ROC RAIDA, MISTA SINISTA and ROB SWIFT invited Total Eclipse to become an official member of the X-MEN. With the high international demand of the all-star DJ collective shortly after Total Eclipse’s induction, the X-Ecutioners’ show hit the road, visiting all 4 major continents as well as the Caribbean.

As a member of the X-Ecutioners, Total Eclipse went from DJ to recording artist, releasing the group’s independent success, X-Pressions in 1997. Taking his craft to the next level, he and the group went on to sign a multi-album deal with Steve Rifkind’s Loud Records imprint, releasing their major debut, the critically acclaimed “Built From Scratch”. The eclectic album, all made by turntables and artist collaborations was a major success earning the Hip Hop DJ icons commercial recognition. Now with their mainstream appeal, the group appeared in numerous major tours like Eminem’s famed Anger Management Tour and Linkin Park’s Project Revolution Tour. Today, Total Eclipse continues to be one of the scene’s most sought after DJs. Whether it’s rocking a hot party for corporate companies like Maxim, Nike, MTV and BET, or manning the turntables and developing mind-blowing performances with hot talents like Miri Ben-Ari (Universal Records), taking part and representing at annual events like THE ROCKSTEADY ANNIVERSARY or ZULU NATION ANNIVERSARY IN NYC for true Hip Hop heads, he continues to take his craft to the next level everyday by developing amazing club sets and showcase routines. What separates TOTAL ECLIPSE from the rest is his diverse style, able to rock any crowd anywhere as easily as he wins battles.