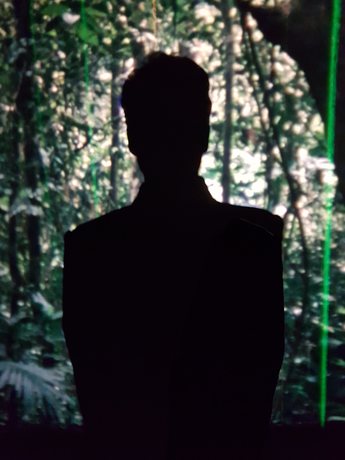 The enigmatic Russian Linesman has been recording music in his Nottingham lair for twelve years, writing acoustically and capturing snippets of vocals, guitars and pianos, and enclosing them in an expansive digital sarcophagus.

He has released numerous singles, EPs and two studio albums to date – his discography reads like a travelogue (which is rather ironic as he hates people who go on about travelling all the time). But so far, that is what the majority of his music has done – from his first release (a vinyl record) titled ‘Bratislava Story’, to his first full-length album ‘Icelandic Story’ (a concept album inspired by travelling around Iceland).

His follow-up, ‘Nostalgia Story’ was a trip into happy childhood memories interspersed with more recent events, balanced carefully on the borderline of nostalgia. The album’s thirty-seven songs were recorded live in one take.

2017 saw him release an incredibly ambitious project titled ‘The Eysenck Suites I-IV”, a year spanning, critically acclaimed series of 7-track mini-albums that explored the psychological theories of Hans Eysenck. This was followed in 2018 by a project featuring an array of remix interpretations of some of the ‘Eysenck Suites’ finest moments.

He is now launching his new project consisting of six four-track EPs that will be released throughout 2019 – 2020, at bi-monthly intervals. Joseph Campbell’s ‘A Hero with a Thousand Faces’ is an analysis of centuries of human storytelling, based around the anthropological theories of Swiss psychiatrist Carl Jung, and this fascinating book has provided the blueprint for an artistic abstraction of the concept of the ‘Monomyth’.

He also runs the Loki Recordings label in his spare time.

11 Things you didn’t know about the Russian Linesman…