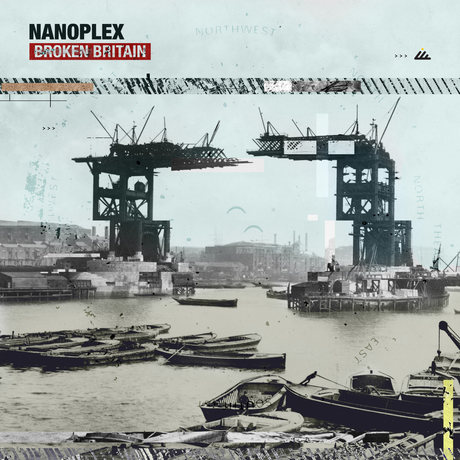 Nanoplex is the live project from two of the pioneers of the UK progressive techno sound, Ben Coda & DJ Ipcress. Their eagerly awaited 3rd studio album comprises 11 tracks created over the past 2 years and is rather pointedly titled ‘Broken Britain’.

“As games play out across the UK, unification has been replaced with division. We now live in a dystopian political landscape where lies and deceit are the accepted currency.” – Nanoplex

The album’s diverse and expansive electronic musings have been abstractly provoked and inspired by the state of a nation whose social, economic and political frameworks are failing. A broad creative canvas captures and seeks to portray multiple moods of protest, hope, unity, anger, bewilderment and betrayal.

“Reflecting the divisions in our society, the album moves through a circle of light and dark, a journey through two years while we watched our homeland fragment.” – Nanoplex

Nanoplex judiciously continue to build thematic menace and intrigue through ‘Past Life’ and ‘The ACCA (Serpent Head Remix)’, before introducing some ingenious fast-paced electro styling (‘Electrocaution’) and take the theme into a darker, twisted guise with the ‘Blue Meanie’. The intricate rising, swooping arrangement of ‘The Jinx’ rides on a highly infectious, locked down groove, as the album builds towards a fantastic finale, culminating in the fizzing and sparking electric energy of ‘Project D’, complete with clever acidic flourishes and melodic hooks, and the excellently intro-ed, pulsating stomp of ‘The Division’.

Inside Nanoplex sits Ben Coda, who needs little introduction, his tech-prog sound crosses boundaries – trademark tough beats and rolling basslines contrast with soaring melodies, fusing his love of the tougher sounds of techno and tech house with classic progressive house. With a hectic international schedule, Coda is taking his sound to the masses.

Fellow collaborator, DJ Ipcress, has risen from the underground dance scene in the UK and has, over the last 5 years, taken his dark edged techno sound across Europe and the world. Fusing techno and house, with a deep minimal groove, his Nanoplex partnership with Ben Coda was always going to produce the slick future techno sound that has now evolved into ‘Broken Britain’.