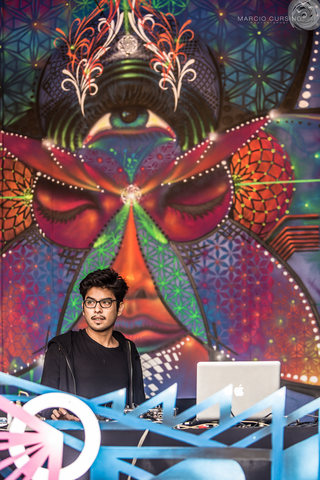 Pragmatix is an artist born in Buenos Aires, Argentina. Since his childhood he played guitar and around 2001 he discovered electronic music. Listening to bands like Hux Flux, Logic Bomb, Hallucinogen and Infected Mushroom his head and soul opened and he soon began producing his own music.Using music as his spiritual path and creative expression, Pragmatix quickly became one of the most important artists in South America.

His style combines mysterious and dark atmospheres with colorful and playful psychedelic melodies, playing with different textures and a lot of grooves. In 2013 he released by Rizoma Records his debut album called “The Invisible Object”. Currently he has been playing in several outdoors and indoors parties around the globe, countries such as Australia, Brasil, Japan, Germany, Swizterland, Israel, France, Italy, Lithuania, Mexico, Greece, Austria, Hungary, Malta, Chile, Espanha, Portugal and the Czech Republic. Having had several top ten tracks he is midst a worldwide tour, rocking dance floors around the globe.