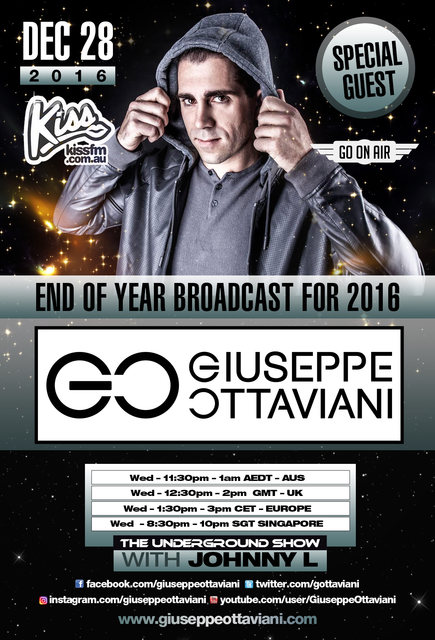 Introduction: personifying trance music’s energy in both approach and output, Italy’s Giuseppe Ottaviani has long been recognized as one of the genre’s most respected and prolific merchants. From his earliest studio work back in 1998 (as the engine behind famed group NU NRG), through to his latter-day releases under his own name, he has established himself as a benchmark for eminent trance. Over the last 9 years his boundary- breaking in-concert experience

Giuseppe Ottaviani Live! has put hundreds of thousands of hands in the air and feet on the floor at the world’s best-known EDM festivals. Exclusively feeding these performances is his vast litany of club hits and remixes, of which ‘Ready’, ‘Angel’, ‘Linking People’, ‘Through Your Eyes’ and ‘No More Alone’ are but a few. Giuseppe’s remains both contemporary and omnipresent in the scene with of-late productions like ‘Falcons’ and ‘Lost For Words’ and most recently ‘Love Will Bring It All Around’, ‘Heal This Empty Heart’ and ‘Passion’ that were featured on from his latest artist album ‘Magenta’, continuing to win trance hearts and minds.

Productions: Giuseppe has long favoured a production-based approach to his EDM career. Drawing on a seemingly limitless reserve of inspiration, passion and the drive to create, it has given rise to a immense discography, comprised of over 35 productions and 45+ remixes. He is probably most quickly associated with his output on VANDIT Records and his remixes and collaborations with Paul van Dyk (of whom he is oft cited as a protégé). Over the years he has been a keen collaborator and has shared production credits with a long list of musically akin producers and vocalists.

The GO! album: In 2009 Giuseppe planted one of his most significant career markers to date, with the release of his debut long-player ‘GO!’. The platform brought with it 14 new tracks (including the significant club hits like ‘’No More Alone’, Angel and ‘Our Dimension’). The album subsequently drew much praise from DJs, fans and the dance press alike.

The Magenta album: for its follow-up Giuseppe drew on the concept of colour theory and philosophy, channelling magenta’s attributes into his music. The album bore immediate fruit with its first single, the Eric Lumiere vocalled ‘Love Will Bring It All Around’. Taking Armin van Buuren’s Tune of the Week on A State of Trance, the single’s also brought acclaim from the dance press. MIXMAG gave it their Single of the Month award and it also won high praise from DJ Mag who said: “Lumiere’s vocal gives this track its light-bulb moment”. ‘Magenta’ also notably carried first-time G.O. coproductions with Ferry Corsten and Aly & Fila as well as vocal team-ups with Audrey Gallagher, Linnea Schössow and others.

Giuseppe Ottaviani Live!: Drawing on his vast audio repertoire, Giuseppe found himself in the unique position of being able to branch away from the traditional mixer/turntables set-up. Launching Giuseppe Ottaviani Live! in 2006, the concept gives a more visually immersive, ‘club-concert’ experience. This has delighted EDM lovers all around the planet and subsequently inspired other DJ/producers to adopt similar approaches. Giuseppe Ottaviani Live!’s gig-sheet has come to read like a Who’s Who of tentpole events. Included among them have been Loveparade, Tomorrowland, Nature One, Global Gathering, Creamfields (UK and Australia editions) Streetparade, Stereosonic, Sunrise, Transmission, WMC, Colourfest, Cream Ibiza, Gallery @ MoS, Zouk, Roseland Ballroom NYC (for ASOT), Eurofest, SW4, WE ARE ONE and numerous others.

The PvD Association: Giuseppe has long been a collaborator and close musical conciliare to trance music’s foremost originator Paul van Dyk. Ottaviani has remixed no fewer than 7 of his releases and shared co-production credits on 3 tracks (‘La Dolce Vita’, ‘Far Away’ and ‘A Wonderful Day’). Paul van Dyk on working together with Giuseppe Ottaviani for his last album ‘ Evolution’: