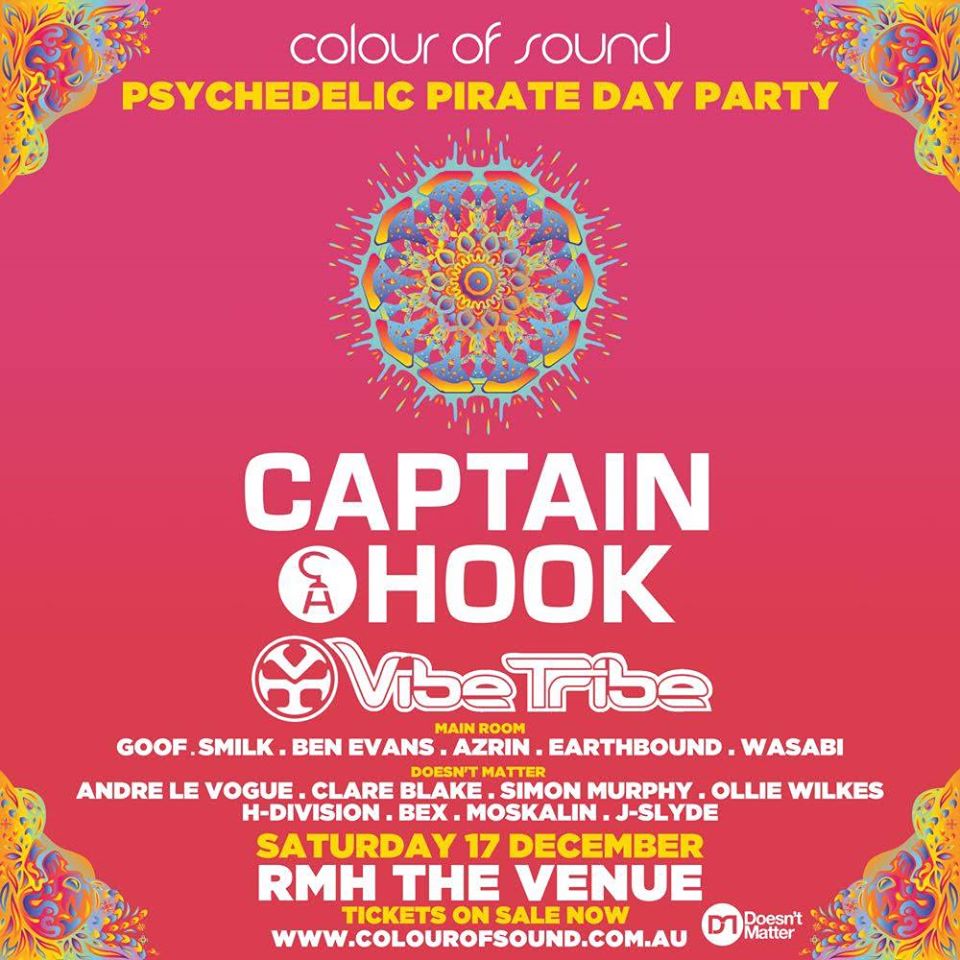 Colour of Sound are back with another influx of psychedelic pleasure this December. The crew have been hard at work cementing one of the biggest acts on the planet, Captain Hook! and to celebrate his return we are throwing down a swashbucklin’ sea-shakin’ pirate fiesta to bring a spring upon her cable and crack Jenny’s tea-cup once and for all! We employ you to don the patch, the parrot, the rum and the ransacking and set your sails to the treasures of the dancefloor as we come together for one almighty sea-shanty session. Yarrrrrrr me hearties!

When your heart is in the right place, rhythm shall follow. This path is a journey of discovering your inner groove. Reshef Harari from Israel, began this trip when he was 15. Fascinated with the experimentation of sounds, Reshef started to collect vinyl and practiced mixing records all day, encapsulated by the groove and curious to know where it could take him. At 17 Reshef was landing regular gigs at parties, where he learnt to tune into the crowd and create an experience for everybody on the dancefloor.

Drawing inspiration from some of the biggest names in minimal trance such as, XV Kilist, Bitmonks and Paste, Rashef began to work on his deep crunchy tone and thoughtful musicality which is still prevalent in his music today. Landing a job with a sound design company, he learnt the processes involved in compressing and EQing using analogue equipment. During this time Rashef was introduced to the realm of psytrance by his older brother and Israeli psytrance pioneer Asher Haviv, from that moment he was compelled to journey as deep into this rabbit hole as possible. In 2003 Domo records owner Avi Nini, was impressed by the level of technical ability Rashef displayed behind the decks which quickly lead to him becoming a label DJ. Later that year Rashef teamed up with Adi Ashkenazi forming the massively popular duo “Quantize”. Releasing music on various labels until the 2009 release of their debut album “Time” on Iboga Records. This was followed by a swarm of “single” releases, until the duo parted ways in 2010 focussing on their solo projects.

It was then time to wear the captain’s hat. Keeping his close ties with Iboga, Reshef started to remix, displaying his interpretation of older tunes, while at the same time collaborating with producers who he had been inspired by in the past. Popularity sparked with his debut album “Human Design”, released in 2011, which took him on an expedition across the world for the next 3 years. This album was a mile stone in his career, where he collaborated with Ace Ventura, Liquid Soul, Perfect Stranger, Loud, Tetrameth Freedom Fighters and ill.Gates, while giving each track unique sound design, texture and colour.

Travelling across the world and performing at festivals expanded his artistic horizons, and filled his mind, body and soul with new energy sources. While on the road he was working for 2 years on a double remix album “Akashic Library”, hand picking his idea of the finest most unique pieces of music. At the moment he is collecting material for a new album, but the best way to understand the essence of the music is to tune into the frequency and feel the pulse of the Hook in what will be his finest performance at the Colour of Sound – psychedelic experience

Vibe Tribe is the project of producer Stas Marnyanski.

Stas, Russian born Israeli, has been producing electronic based music since his early teens (Age of 13), 4 years of experimentation of thorough learning kick started his wonderful, professional career.

Soon later he begun releasing tracks on various compilation releases with a desire to bring something new & fresh to the global scene.

His innovative and breathtaking melodic high tech psy-trance style, has fast gained him global recognition, and placed him on the most demanding stages all over the world.

His debut album “Melodrama” saw light in 2004, his second studio album “Wise Cracks” was released in 2006 followed by his third album “Destination Unknown” that’s been released in 2009.

Ever since, this prodigy has been touring the globe constantly performing basically on every important event, presenting his unique powerful style to mass audiences.

Vibe Tribe has joined forces on remixes and collaborations with some of the leading acts in the psy trance scene such as: Infected Mushroom, Skazi, Sesto Sento, Bizzare Contact, Azax Syndrom, Space Cat, Spade and many others, Just to name a few..

This busy soul is always at work, producing more and more fresh new material & remixes, which will be released in the near future.