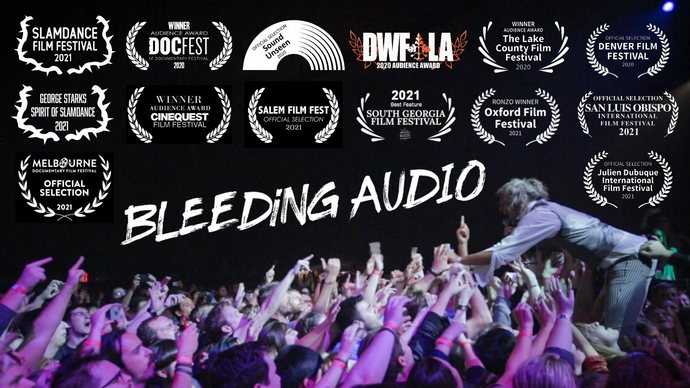 Timmy catches up with the Director Chelsea Christer about the documentary film Bleeding Audio.

BLEEDING AUDIO is an official selection of the Melbourne Documentary Film Festival (MDFF) to take place in July, but they have been specially selected as a preview screening selection to take place on April 18th, at 5pm at Cinema Nova.

BLEEDING AUDIO is an intimate portrait detailing The Matches story while answering the question of why the band called it quits when they were so close to breaking out. The Matches had a promising career, a defeating break up, and inspiring reunion and it is told through the eyes of bandmates Shawn, Jon, Matt, and Justin. Their story is not necessarily unique, as many bands were taken out by the digital age of the music industry, but in the documentary interviews, it is apparent most musicians and industry executives had a similar reflection on how the industry has changed. “The journey to tell this story really began in 2014 when they informed me of their decision to reunite. . . . Once their reunion proved to be as special as I predicted, The Matches were humbled and started to look back at their career through a different lens. I convinced them that their story was worthy of a feature.”—Chelsea Christer (Director).

BLEEDING AUDIO not only features personal and intimate interviews with The Matches band members themselves but also dozens of well-known musicians contributed their own interviews to the film, such as, Mark Hoppus (Blink 182), Nick Hexum (311), Tom Higgenson (Plain White T’s), Simon Neil & James Johnston (Biffy Clyro), Cassadee Pope (Singer/Songwriter), Justin Pierre & Tony Thaxton (Motion City Soundtrack), to name a few. “The Matches were always a band for me that was like, how is this not massive? I remember seeing them live for the first time, and I was like this show is awesome. This should be in an arena. I felt like I was experiencing history in the making.”— Cassadee Pope (Singer/Songwriter).

“The history of rock and roll is littered with the corpses of bands chewed up and spat out by the industry, and all too often it’s done with a shrug and some vague excuses about band strife or some such nonsense. Documentarian Chelsea Christer goes a lot deeper with her history of Oakland pop-punkers the Matches, and really shows how callous the business really can be to a band that survives on its heart and its soul.” -Richard Whittaker (Austin Chronicle)

“Bleeding Audio has all the critical ingredients of an exceptional music documentary. First is the music. 90s rock coming out of the Bay Area was exceptional. The Matches were hard rock/ punk with little bits of everything else (like ska). After watching the doc, I headed straight to my streaming service, and they’re on my playlist now.”- Alan NG (Film Threat)