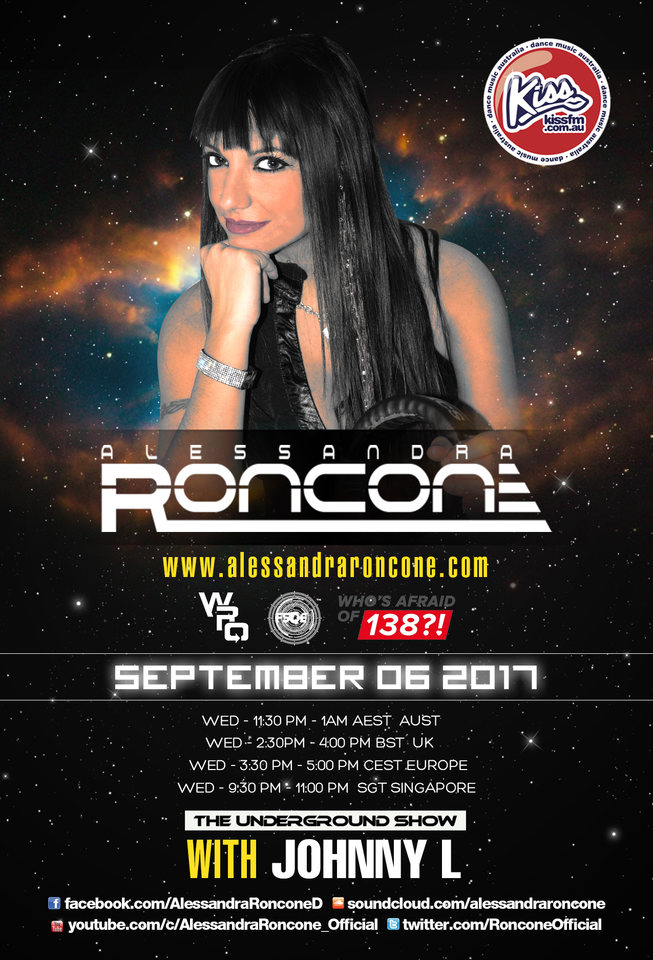 Alessandra Roncone is a female DJ/Producer from Bologna, Italy.
Since her journey into music in the 90’s began she pursed a career in an industry that is in her blood.
Alessandra started to play in good local Clubs and at the biggest Italians Trance events like Art Of Trance (BO) and Trance Gate (MI).
She began to produce music on 2012 with mentoring from producers such as Mark Lillini and trance heavy weight Darren Porter.
Over the years she began to hone her skills and began a rapid rise in the music she loved.
Her production skills and Djing energy caught the eye of many in the industry and people began to take notice. With regular support from the likes of Aly & Fila, Giuseppe Ottaviani, Sean Tyas, Darren Porter, Manuel Le Saux and many more, she has released frequent tracks on the imprint from the Italian trance “Extrema Global Music” – hitting number 1 on Track It Down Trance Charts.
His greatest success came with the release of “Sogno” on FSOE recordings deploying the 3th place on the Beatport Trance Chart, 86th on Main Top 100 Tracks, staying on the chart for more than a month.
She gained also momentum with reworks of classics such as Sunbeam – Outside world, Lange – Drifting away and Tiesto – Elements Of Life.
Coupled with new management, logo and her radio show aptly named “Forza” – there is nothing stopping Italian fastest rising Trance Queen Alessandra Roncone. With an immense summer in 2016 including a European season tour in Ibiza, frequent gigs in the Netherlands, Germany, Zurich, Italy, Spain, France and Asia alongside some of the biggest names in the industry such as Aly & Fila, Sean Tyas, Giuseppe Ottaviani, Darren Porter, Ferry Tayle, Standerwick, The Thrillseekers, Ram and many more… She also exploded on to Asia stage Playing for titans in the industry such as Transmission and FSOE, her profile is showing no signs of slowing down.There is so much more to come from this outstanding and energetic DJ.
She released music over the years on many high profile labels, more recently with the likes of Future Sound Of Egypt and Armada.
With bookings, releases, collabs, remixes and tours to announce, 2017 is proving to the year Alessandra Roncone arrived in trance music and she is here to stay.
stay connected!