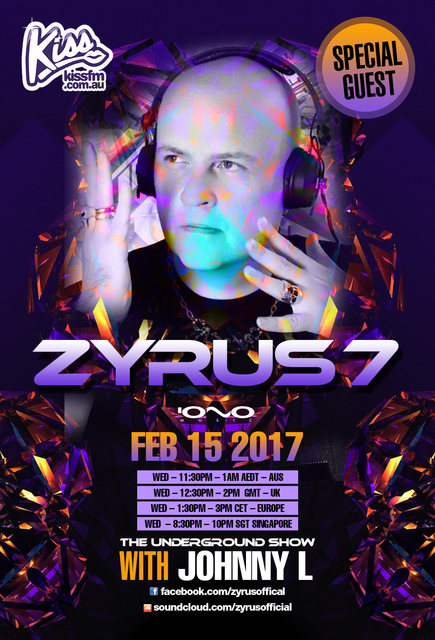 Zyrus, born in frankfurt / germany, started at early age getting addicted to the magic of electronic music. He began playing progressive trance from the end of 2002. Since then he has played and performed at big raves and festivals like ultra miami, nature one, Rolezinhos brazil, next to people like Astrix, Infected Mushroom, Paul Oakenfold and more, he decided in 2014 to start a new project and Zyrus 7 was born.

In 2010 he was awarded by his hometown with the medal of honour for his international cultural work. In 2011 he travelled for the german goethe institute to the countrys of uzbekistan and tajikistan. He was the first electronic dj playing in uzbekistan and filled a tennis arena of 3500 ppl. The ticket were gone in 1 hour. During his tour, he did workshops with kids teaching them about the history of electronic music.

In april 2014 he performed at the psychedelic theatre in berlin and got awesome reactions by the crowd. Thats when he decided to start “Zyrus 7”, focusing on progressive psy trance.

At the moment he is working on a collab with “ZYCE” of Tesseract and on his next solo singles “Lupus dei”  and Reflections. A collab with lebanese psy crossover artist “Edie Bitar” is planned too.

For 2017 he will be touring in japan, singapore, Thailand, argentina and the usa/mexico