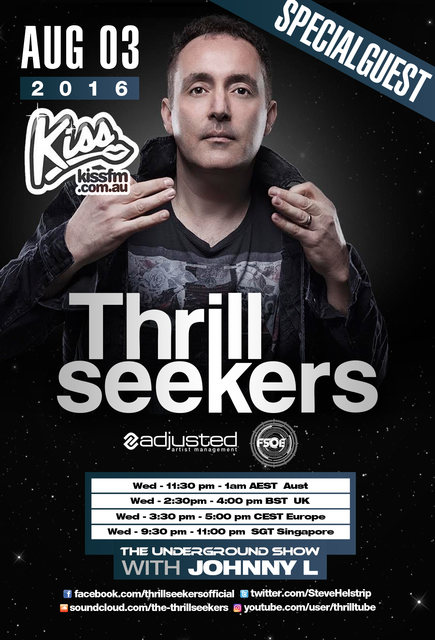 Steve Helstrip, aka The Thrillseekers, has been at the forefront of the world’s dance scene for well over a decade. From his first single ‘Synaesthesia’, through to the club anthems ‘The Last Time’, ‘Anywhere With You’ and ‘This Is All We Have’, Steve Helstrip has been behind some of the most emotive electronic music ever released. He’s worked with pioneers like Trevor Horn, shared co-production credits with Chicane and Ferry Corsten, and remixed for artists including Tiesto and Armin van Buuren.

Steve is as well known as a DJ as he is a producer having captivated crowds the world over with his carefully crafted sets. Creamfields, Ministry of Sound, Godskitchen and Gatecrasher have all born witness to his fluid mixing, unique style and energetic performances. In 2004 The Thrillseekers entered DJ Magazine’s Top 100 DJs poll, before going on to break into the top 50 (landing at no. 45) in 2006.

The Thrillseekers story started back in 1999, where, with a relatively basic home studio, Steve constructed the trance milestone that is ‘Synaesthesia’. Signed and released by Neo Records in 1999 at the height of the trance explosion it has gone on to sell over 1,000,000 copies, across its numerous, repeated worldwide releases.

In late 2005 The Thrillseekers moved into compilation territory, with the release of ‘NightMusic Vol 1’. The CD and 30 date world tour that followed was an instant smash, generating State-side, Russian and Asiain releases of the compiltion. Summer 2007 saw the heavily anticipated follow up hit the stores, and repeated again in 2009 with NightMusic Vol 3.

After two huge vocal single releases ‘Waiting Here For You’ with Aruna and ‘The Last Time’ with fisher, fans were pleased to see the return of Steve’s remixing skills in 2009, as he completed Solarstone’s stunning ‘Part Of Me’ and Chicane’s ‘Poppiholla’, which spent over three weeks in the top 10 of the UK charts. However, rather than just concentrating on his productions, Steve set to the airwaves with his NightMusic Podcast and Radio Show concept, broadcasting to over 40 FM and internet radio stations and heard by over 2.5 million listeners worldwide every month.

Not resting on his laurels and with a clear objective to think outside the box, he welcomed 2010 with the first phase of his Live Xtreme show. Steve’s 1 hour live performance includes his biggest club anthems remixed and replayed live on stage. It also features tracks from his other guises such as Rapid Eye, Hydra and Insigma and truly takes the live performance of Electronic Dance Music to the next level. To date Steve has showcased Live Xtreme at high profile events across the world including ETD Love (San Francisco), DancePort Festival (Taiwan), Gaudi Arena (Moscow), and twice at London’s Ministry of Sound.

In 2014 The Thrillseekers notched up 4 consecutive club anthems including ‘This Is All We Have’, which was consistently voted as one of the top trance releases of the year. Armin van Buuren described his track ‘Find You’ as ‘simply brilliant’.